Waking Ned Devine was a wonderful movie.  It is about a little town in Ireland where one resident wins a lottery, and how the entire town reacts.

It was made as an independent film, and shot on the Isle of Man.  The filming is beautiful, and every single character is portrayed perfectly by every actor and actress.

My only problem with this film, is the cast members.  Most of them are unknown in the USA, and many of them have only been seen here in TV shows or films that needed Irish background characters.  They are almost all of British or Irish descent.  I am unfamiliar with almost all of them, but of course, that doesn't mean there isn't some great acting in their work as well.  I bet I have seen many of them in some movies, though! 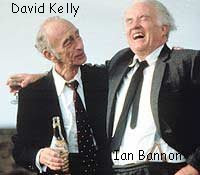 David Kelly (b. 1929) has the most memorable part in the film.  I so much want to give the entire film a complete review, but to do so would absolutely ruin it for you if you haven't seen it.  Kelly started on TV in 1951 and has 93 roles.  He was in The Italian Job with Michael Caine in 1969, but mostly he was on British TV.

Fionnula Flanagan and Susan Lynch hold the female leads in Waking.  Of the two, Flanagan has more international roles, but they both show how good they are in their art.

This is a little, feel good movie that should not be missed, especially if you like British humour.  If you've seen "Faulty Towers" or "Are You Being Served" you should add Waking Ned Devine to your list of movies.  Sit down with a pint of Guinness and enjoy the film.
Posted by Bit Part Blogger