I am trying to find some Bit Part Players who are not really famous or not really old.  Let's take a look at Caroll Baker, born in 1931.  In her youth, she was a beautiful blonde, and was cast in Marilyn Monroe type roles.  According to the trivia on IMDb, she was Miss Florida Fruits and Vegetables of 1949.

Her first film was Easy to Love with Esther Williams and Van Johnson in 1953.  Baker had some TV parts, then was cast in Giant in 1956, after being "discovered."  That was a big break.  The cast of Giant reads like a Hollywood "A" guest list.

Baker rode a wave of good movies, but my feeling is that her good looks got in the way of showing her acting talent.  Before she was 35, she made:
Baby Doll - 1956 with Karl Malden and Eli Wallach
The Big Country - 1958 with Gregory Peck
But Not for Me - 1959 with Clark Gable
The Miracle - 1959 with Roger Moore
How the West Was Won - 1962 with an all star cast, directed by John Ford
The Carpetbaggers - 1964 with George Peppard, Alan Ladd and Robert Cummings
Cheyenne Autumn - 1964 with Richard Widmark, also directed by John Ford
The Greatest Story Ever Told - 1965 with Max von Sydow
Harlow - 1965 where she played the title role

That's quite a list for just ten years.  After Harlow, she moved to Italy and started making foreign films.  Since American audiences seem to prefer Hollywood films, I think that really impacted her popularity here, if not her income.  She is now well into her thirties.  Beauty may fade, but if you are recognized as a talented actress you can survive. 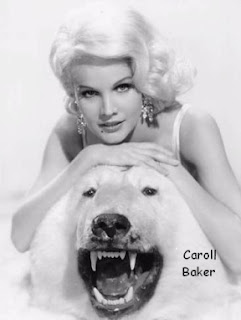 She worked on TV in later years.  "Tales from the Crypt" and "L.A. Law," plus a lot of TV movies.

In 1990 she made Kindergarten Cop starring Arnold Schwarzenegger.  She was also in The Game in 1997 with Michael Douglas as his housekeeper, Ilsa.  That was an incredible story in what is a totally unbelievable movie.  Well made with a good cast and a surprise ending that I will not reveal.  See it if you can, even if it is unbelievable.  Caroll Baker had a Bit Part that perfectly suited her.

Her last listing on IMDb is in 2003 in a TV series called "The Lyon's Den" with Rob Lowe.  Ms. Baker, you are only 79 years young.  If your health is up to it, keep on acting!  Her list on IMDb is 81 parts strong.
Posted by Bit Part Blogger