I mentioned Kenneth Mars yesterday in my post about What's Up Doc?.  Here is some more info about him.

Mars has a way with his voice...a good thing for an actor.  He started out voicing additional characters on "The Jetsons" in the 1960s.  He appears on many TV shows, including "Car 54, Where are You?," "Gunsmoke" and "Get Smart" before landing a recurring role on "He & She" which lasted a year.

His first movie was the 1968 Mel Brooks comedy, The Producers.  Mars also appeared in Brooks' Young Frankenstein as the police inspector in 1974.

1969 put him in Butch Cassidy and the Sundance Kid as the marshal who was trying to round up a posse to chase the Hole in the Wall Gang.  Then, in 1972, What's Up Doc? as a musicologist with a totally humorous accent!

"Steambath" was a TV production of Bruce J. Firedman's Off-Broadway play about a group of people who meet in a steambath and realize they are all dead.  The cast was incredible.  Bill Bixby starred, with Ken Mars, Herb Edelman, and Valerie Perrine who wears nothing but a towel and sometimes not even that.

Mars did much more TV in the 1970s and 1980s, and also started doing more animation voices.  In the movies he worked with Goldie Hawn in Protocol (1984) and Chevy Chase in Fletch (1985).  He played Lyndon Johnson in 1985 in Prince Jack.  I don't think he looks much like Johnson, but I haven't seen that movie. 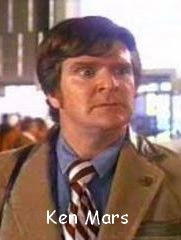 His voice is heard as Triton in The Little Mermaid which was a big hit for him in 1989.  After that he becomes pretty regular on several animated TV series.  His collaboration with Walt Disney Pictures must be lucrative and I am sure it helped him secure other voice parts.  He is listed on LOADS of animated productions on IMDb, including the Land Before Time series of movies.

In this century, Ken Mars has appeared regularly on "Malcolm in the Middle," and was also in an episode of "Hanna Montana."  I am sure we will see (and hear) more of Kenneth Mars.  He already has 196 roles listed on IMDb.
Posted by Bit Part Blogger