Nobody Puts Baby in a Corner!

Let's look at who else was in Ghost, other than Swayze, Demi Moore, and Whoopi Goldberg.

I am not sure what to think of Tony Goldwyn (b. 1960).  One man's star is another man's supporting actor.  I put him in the latter category.  He has 62 acting credits and 16 as director.  That's not bad.  His choice of projects seems to be fairly intelligent.  I very much enjoyed The Pelican Brief (1993), and he latched on to Tom Cruise in The Last Samurai (2003). 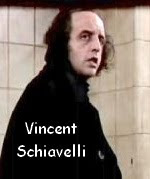 I think everyone's favorite in Ghost was the Subway Ghost played by Vincent Schiavelli (1948 - 2005).  He was born in Brooklyn and I doubt he ever tried to get rid of his NY accent.
Early projects of Schiavelli included One Flew Over the Cuckoo's Nest (1974), and he also showed up in The Adventures of Buckaroo Banzai Across the Eight Dimension in 1982.  I detect some quirkiness here.  He was even a holographic weapons salesman on "Star Trek: The Next Generation."
Schiavelli has 153 roles listed on IMDb.  He was a bad guy in Tomorrow Never Dies (1997) and if you get into a James Bond flick, you have arrived.  He even wrote three cookbooks and spoke fluent Italian!  Lots of talent there.
Rick Aviles (1952 - 1995) played the killer, Willie Lopez.  Aviles was a stand up comic, and his first film was Cannonball Run (1981).  The film he made after Ghost was The Godfather: Part III, and his last film (in which he appears) was Waterworld (1995).  23 roles total, including some TV.

Ghost seems to have faded in popularity.  I don't see it listed "on demand" or even on some of the movie channels.  Is that Demi Moore's fault?  Maybe not...she was rather fetching in this one.  Much, much better than her all-too-serious performance in Striptease (1996).  We all know that Whoopi Golberg really held Ghost together!
Posted by Bit Part Blogger