Olin Howland had a 50 year career in movies and TV.  His first film was called Hick Manhattan in 1918 when he was billed as Olin Howlin, a name he used many times.  He made about ten silent films, then started in talkies in the 1930s.

One interesting film from 1919 seems to be an early version of Tarzan, done in silent comedy style.  Here is the plot of Beresford and the Baboons taken directly from IMDb:

"Beresford, the son of the Earl of Swank, is lost on a desert island as a boy. There he is found by a tribe of baboons and raised as one of them. They teach him the lore of the jungle: mining engineering, stud poker, and hem-stitching. Eventually however he is discovered by an expedition which includes a young lady with whom he falls in love."
Written by Jim Beaver

Other than the lessons taught by a baboon, that is basically the story of Tarzan, right down to being found by Jane.  I wonder if Beresford is available anywhere.  I would like to see it.

1934 put Olin in Treasure Island with Wallace Beery and Jackie Cooper.  He was in A Star is Born in 1937 with Janet Gaynor and again in 1954 with Judy Garland.  He made one film in 1944 with Laurel and Hardy called Nothing But Trouble.

In the 1940s he was working at Republic Pictures making westerns.  Three with Roy Rogers.  He also worked with John Wayne in four films and Yakima Canutt in seven.

One of those was Gone with the Wind (1939).  He played a carpetbagger in a small role, but hey!, it was GwtW, one of the biggest films of all time. 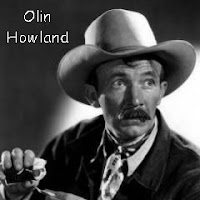 He started in TV in the 1950s, but continued making films.  An early, giant bug, sci-fi/horror film in 1954 starring James Whitmore called Them! is in his filmography.  BTW, Them! was about giant ants.  In that era almost any bug could become a giant star in film due to radiation.

He was in two films with James Stewart including Spirit of St. Louis in 1957.  His last movie was The Blob in 1958, starring a young Steve McQueen.  The Blob was made in Phoenixville, PA, not far from where I live.  The Colonial Theater is still there and has a Blob Fest every year.

It is a shame that many of Olin Howland's roles were uncredited, but you must envy the life he led, working in over 200 roles and with so many stars.
Posted by Bit Part Blogger