I guess Will Rogers really isn't a Bit Actor.  He was a really big entertainer all over the world.  As far as movies go, the films he appears in are no longer on anyone's "must see" list, except for the novelty they may contain.  Does that make him a Bit Actor in film?

Rogers was famous in vaudeville for his political humor spoken while doing rope tricks.  He started making films in 1918, and his first 21 films were silent.  That works for rope tricks, but his popularity really started to increase after sound films came in and people could hear what he had to say.

In the late 1920s Rogers also made some short, and I am sure humorous, documentaries all across the globe. You won't find any big Hollywood names appearing with Rogers in most of his films. He was the star. He does show up in a cameo in Hollywood (1923) which also has cameos of every living star available. I have never seen such a cast!  Other than that, no Barrymores, Gishes, or Pickfords.

1929 was his first appearance in film with sound.  Happy Days was a review with many Hollywood stars.  Reviews were popular in the early soundies because they could show off the new technology.  (I wonder what Will Rogers would think of 3D movies with surround sound?) 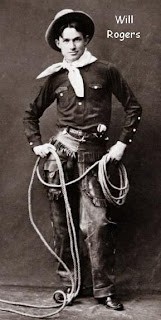 In some of his sound films we see more recognizable names.  A 15 year old Mickey Rooney in The County Chairman in 1935.  Billie Burke, Myrna Loy, Stepin Fetchit, Alan Hale, Janet Gaynor, Sterling Holloway, and others worked with him in some of his other 53 films, and he made some films with director John Ford.

Sadly, he was killed in a plane crash in 1935 in Alaska.  In 1952 his son, Will Rogers Jr., played his father in a biopic called The Story of Will Rogers and it had quite a cast.  Rogers as a child was played by Frank Bank who went on to play Lumpy on "Leave it to Beaver."  And then in 1961, Bob Hope narrated a biography of him on "Project XX."  You will find other documentaries as well.

I'll leave you with a Will Rogers quote.  "There's only one thing that can kill the movies, and that's education."
Posted by Bit Part Blogger