I was looking at the filmography of Pat Flaherty (1897 - 1970) and it is impressive, especially for someone who was not much more than an extra.  He managed to appear in almost 200 films in about twenty years, from 1934 to 1955.  I bet some of them are your favorites.


Here are some stars Flaherty worked with:
Humphrey Bogart 7 films
James Cagney 6 films
Gary Cooper 5 films
James Stewart and George Raft, 4 films each
Cary Grant and Spencer Tracy, 3 films each
Twice each with Henry Fonda and William Powell
And he was in two Frank Capra films. 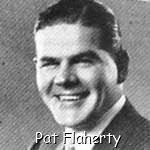 Flaherty was also a technical advisor on sports films, and is credited with teaching Gary Cooper how to pitch in The Pride of the Yankees in 1942, and was advisor for The Babe Ruth Story in 1948.  Pretty impressive for an actor who was uncredited in 155 of his 199 roles!
Posted by Bit Part Blogger