I thought I'd take a look at the cast list for The Blob (1958) once again.  Yesterday we covered Olin Howland, the first Blob victim in the movie.

Vincent Barbi played George the cafe owner.  I will assume that was the diner where the Blob met an electrifying end, because I don't remember any other cafe in the film.  The diner used in the film is often mistaken for a diner that was near the Colonial Theater in Phoenixville.  That Phoenixville diner has been torn down and replaced by a large chain pharmacy.  The diner used in The Blob was located about 18 miles from the Colonial Theater, in Downingtown, PA.  A new diner has been erected on the same foundation as the original diner, but I believe it is still open.
Back to Vince.  Vince Barbi was born in Italy and his first few films were made there.  He worked with some great stars in his early days.  Richard Attenborough in The Baby and the Battleship (1956) (A film I have never seen or even heard of), and Audrey Hepburn, and Henry Fonda in War and Peace also in 1956.
He worked with James Cagney and Shirley Jones in Never Steal Anything Small (1959, just after The Blob) another one I am unfamiliar with.  Cagney would have been about 60 when he made this musical.

Many of his mid-career films seem dark, with titles like Pay or Die (1960), Confessions of an Opium Eater (1962) and Convicts Four (1962).  Perhaps to retain his sanity he also appeared on "The Jack Benny Program" and "The Dick Van Dyke Show" on TV in that era, and Vince made some comedies as well. 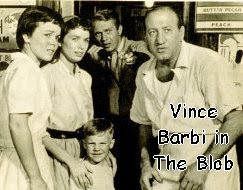 In 1975 he was cast in a small role in Capone with some real stars, Ben Gazzara, Harry Guardino, Sylvester Stallone, etc.  He also was way down on the cast list in Raging Bull in 1980.  At this point in his career he is approaching 70 years old, and I don't know how his health is.

He made eight more films, listing a total of 65 roles in film and on TV, from 1954 to 1994, and I am unfamiliar with the majority of them.  Once again, we see the life of a non-star, but an important part of movie making, the Bit Player.
Posted by Bit Part Blogger