The Bridge on the River Kwai...for Christmas?

A recent acquisition of mine is the recently restored collector's edition of The Bridge on the River Kwai (1957).  Now, how do I justify writing about a WWII movie at Christmas time?  No problem...this is a GREAT gift idea!

Columbia Pictures and Sony have released it just in time, and in a gift package that is perfect for any movie buff.  The box includes both a DVD and Blu-ray disc.  They are packaged in a 32 page book, with the Blu-ray disc in the front and the DVD in the back.  You also get a dozen small copies of the lobby cards.  See one below.

The pages of the book contain movie posters, a list of credits, stories about the film, and a LOAD of photos.  A lot of content is from the original 1957 souvenir book. 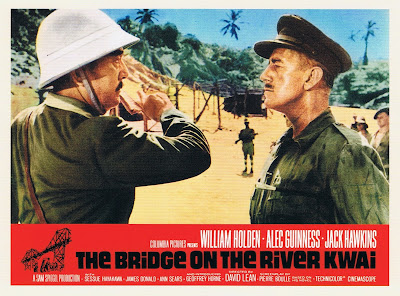 The movie itself is worthy of a blog post.  It earned seven Academy Awards, including Best Picture, Best Director, and Best Actor (Alec Guinness).  The cast list is pretty short, though, and leaves me little in the way of Bit Actors to talk about.  I believe that the main characters, played by Holden, Guinness, Jack Hawkins (1910 - 1973) and Sessue Hayakawa (1889 - 1973) all shared equally in the success of this film.

There were a few others who played the prisoners, and of course there was a good number of Asians playing their captors.  Hayakawa had quite a career, spanning the years 1914 to 1966 and 103 titles.  He worked with many stars including Jerry Lewis in The Geisha Boy (1958).

This release is a bargain.  If you don't receive it as a present, make sure you buy it for yourself!
Posted by Bit Part Blogger