There were other Mummy's (or is that mummies?), not including Billy Mumy.  They start in 1911, then 1912, Georges Melies made one in 1914, and a last silent version was released in 1923.  1932 was the best version of The Mummy according to almost everyone, except maybe Brendan Fraser fans.

A year after releasing Frankenstein with bit actor Boris Karloff, a new story of The Mummy came to the screen.  Karloff was now a big star, but this was his 85th appearance on the screen.

Several of the other stars in The Mummy had only made a few movies in their career.  Zita Johann played Helen Grosvenor, the female lead and the object of Imhotep's affection.  She only made eight films, preferring the theater.

We do see some prolific actors, though.  Noble Johnson played the Nubian, among his 146 roles from 1915 to 1950.  He was in six Cecil B. DeMille films.  In 1933 he was the native chief in King Kong.  He started making westerns, and became a Native American in the movies.  There must have been make up involved because true Nubians were very dark skinned!  Johnson was the founder of Lincoln Pictures, the first African-American film company.

Leonard Mudie, who played Professor Pearson, was in his fourth film, of what would become a 150 role career, including television.  He worked from 1921 to 1965 in a career that allowed him to rub shoulders with some incredibly famous people.  Many film buffs rate the 1930s and 1940s as the best two decades for movies, and I am one of them. 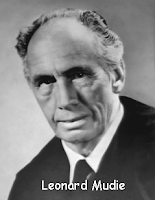 Mudie went on to some TV roles as well and even appeared in the pilot for "Star Trek" in 1965, the year he died.

I haven't seen The Mummy in quite a few years.  It is time to look for it again!
Posted by Bit Part Blogger