Where would Homer Simpson be if there were no Jimmy Finlayson before him?  It was Fin who would look into the camera and exclaim, "D'OH!" usually with great emphasis and one eye closed.  Homer was inspired by Fin.

Finlayson was born in Scotland and came to America in 1912.  He appeared in the theater until he landed in Hollywood in 1916 and took a stab at movies.  His first film was released in 1918 and by the next year, he was with Mack Sennett, where he worked until 1922.

Hal Roach was next, and it is here that Fin found a home and some great friends.  About half of his 240 or so movies were made there.  Fin made some silent films with San Laurel and some with Oliver Hardy before they were a team.  He then went on to make over 30 films with them as a team.

In the Sons of the Desert, we toast the memory of Fin at every banquet.  He was the perfect foil for L&H.  His role in Way Out West as the saloon owner trying to put one over on L&H and Rosina Lawrence is a comedy classic.

Finlayson did make some dramas as well.  He appeared in The Dawn Patrol with Douglas Fairbanks, Jr., and For the Defense with William Powell both in 1930, and I am sure in others. 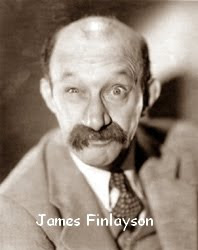 Later he was in The Great Victor Herbert in 1939 with Mary Martin, and To Be or Not to Be with Carole Lombard and Jack Benny in 1942.  In 1951 his health was starting to decline, but he made Royal Wedding with Fred Astaire and Here Comes the Groom with Bing Crosby.

The moustache he wore while at Hal Roach was fake, so you have to look for him in the other films.  It will always be the Laurel and Hardy films that he is remembered for.  Watch him in Big Business, a 1929 silent film with Stan and Ollie as Christmas tree salesmen trying to sell Fin a tree.  It is easily one of the best silent comedy shorts ever made, and Fin is easily one of the best Bit Actors to ever live.
Posted by Bit Part Blogger