I heard about Patricia Neal passing away yesterday, so I looked up her extensive filmography.  68 roles and she pretty much started in films as a star, right from Broadway.  Her first film in 1949 was John Loves Mary starring Ronald Reagan.

That got me thinking about Reagan's stint as the host of "Death Valley Days," which then brought to mind The Old Ranger, who preceded Reagan.  I watched that show many times, probably in a lot of reruns, but I didn't know the identity of The Old Ranger.

Any question like that is easily answered on IMBd.  Stanley Andrews was The Old Ranger.  Born in 1889, he later voiced Daddy Warbucks on radio in "Little Orphan Annie" from 1931 to 1936.

He started doing bit parts in movies in 1933 making Roman Scandals with Eddie Cantor and The Goldwin Girls.  That was the first of 371 roles in movies and on TV.  Two films with Greta Garbo and two with Shirley Temple.  Seven Frank Capra films: including Mr. Deeds Goes to Town and Meet John Doe with Gary Cooper; You Can't Take it with You, Mr. Smith Goes to Washington and It's a Wonderful Lifewith James Stewart; State of the Union with Tracy and Hepburn; and Riding High with Bing Crosby. 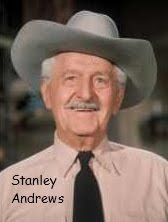 The list is endless.  Many were "B" westerns and serials, and then Andrews started making television appearances.  Once again, he is best known as a western actor, and appeared with Roy Rogers and on many early TV westerns.  He was a regular on "The Range Rider" with Jock Mahoney and Dickie Jones and appeared frequently on "The Gene Autry Show" and "The Lone Ranger."

A lot of his work is probably forgettable.  I haven't seen the early 1950's serial Canadian Mounties vs. Atomic Invaders, and I don't hope to.  He was apparently in the first five chapters.  It is interesting that on many of the TV series he was in, he played different roles every time he appeared.

He ended his career in 1965 on "Death Valley Days" as The Old Ranger and host when it was decided that a younger host was needed.  He passed away in 1969.
Posted by Bit Part Blogger