Laurel and Hardy made a silent film in 1929 called Bacon Grabbers.  In it, in a small bit part, we see an 18 year old Jean Harlow as Edgar Kennedy's wife.  Harlow was born in 1911 and Kennedy was born in 1890, so I guess she prefers older men! 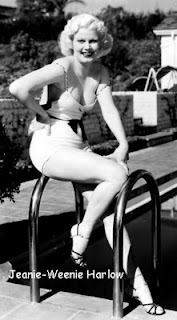 Its a pretty good film about L&H as debt collectors, going after Kennedy who hasn't paid for his radio.  They serve the summons and then try to repossess the item.  Of course, in a slap stick silent film, total destruction ensues.

Harlow made three films with L&H, plus a fourth where she is only seen in a photo as Ollie's sweetheart, Jeanie-Weenie.  She made eight films at Hal Roach Studios, and only about 41 films in her short life.

Some other parts in Bacon Grabbers were played by actors who really worked for a living.  I will cover Charlie Hall in another post, but he is a perennial favorite of all Sons of the Desert.


Eddie Baker (1897 - 1968) played the sheriff in this, one of over 200 roles he is in on film starting in 1917, and later on TV.  He made 71 at Hal Roach from 1917 to 1934, and he made five films with W. C. Fields.  Most of the early films are not famous, having been lost or just not popular because they are silent.  That is a shame because silent films can be great, and they should be viewed by film buffs.  After all, everything we learned about making films came originally from silents.

Go find a good silent film to watch.  Keep in touch with classic film web sites for silent film festivals, and read the Silent Movie Blog.  It is worth it.
Posted by Bit Part Blogger