He was not a big star.  He was on Broadway and played a cranky old man, a character he brought to the screen as well.  Charles Sellon is a Bit Actor.

I first noticed him in It's a Gift (1934) starring W. C. Fields.  He played a cranky old blind man, who almost destroyed Fields' shop.  But that came at the end of his career. 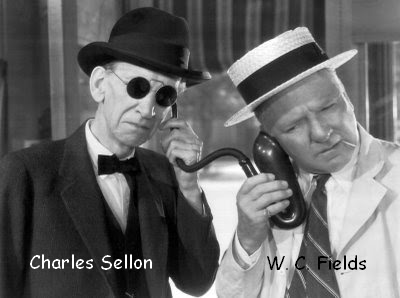 He started on the screen in 1923 in a movie called The Bad Man with Harry Myers.  I talked about Myers when I covered Chaplin's City Lights (1933) a few days ago.  When you look at the interaction of the early stars, you begin to see how small Hollywood was back in the silent era.  I bet everyone knew everyone.

Most of the films he made are of little consequence.
Vagabond Lover (1929) with Rudy Vallee
Tom Sawyer (1930) with Jackie Coogan
Six films with Jack Oakie
Bright Eyes (1935) with Shirley Temple

But he did get to work with the likes of Marlene Dietrich, Paul Muni, Lionel Barrymore, Barbara Stanwick, and so many other great actors and actresses.  Watch an old movie, pick out almost any uncredited player, and look them up.  They made the movies what they are.
Posted by Bit Part Blogger