I admit it, I like the Indiana Jones series of movies.  It's a guy thing.  Some are better than others, and Raiders of the Lost Ark (1981) is certainly the best of the series, as the first installment of any movie series usually is.

The prequel, Indiana Jones and the Temple of Doom was released three years later in 1984.  Here is an interesting fact...Harrison Ford (b. 1942) made Blade Runner in 1982 and Star Wars: Episode VI - Return of the Jedi in 1983.  Now that is a really smart choice of roles by him with four hit movies in the same number of years...and a big money maker for Steven Spielberg (b. 1946).  Perhaps being a superstar is as much about opportunity as it is talent.  Ford certainly has both.

Let's look at Temple of Doom and some of the smaller parts.  Jonathan Ke Quan (b. 1971) played Short Round.  It was not exactly a bit part in this movie.  He has made six movies, a good bit of TV, and is now a martial arts coordinator in Hollywood.

Amrish Puri (1932 - 2005) plays the bald, bad guy.  After he shaved his head for Temple of Doom, his popularity in India as a movie villain soared, so he retained the look.  He has a total of 264 roles on IMDb, almost all on film and for the audience in India. 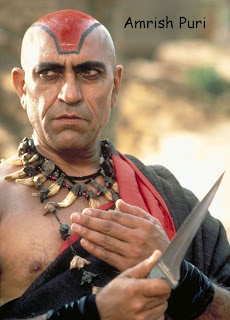 Maybe next time I can cover the 31 dancing girls listed in this film!  I wonder if they all have pictures online somewhere.
Posted by Bit Part Blogger