Dale Dye (b. 1944) is a military man who served in the Marines, spent five years in Viet Nam, received three Purple Hearts and a Bronze Star for valor, and became a military advisor to the film industry.  He has appeared as a Bit Actor in 72 roles (film, TV, video games, voice).

IMDb can be a little gray when it comes to the number of films an advisor actually works or appears in.  He is listed as advisor on 48 films.  That could be fairly accurate.  His films include quite a few big ones with many great actors and actresses.

His second film was Platoon (1986) which won four Oscars.  He was the military advisor and also appeared as Captain Harris.  Not a bad start.  A few years later he is in Born on the Fourth of July (1989) with Tom Cruise.  He made four films with Cruise.

1991 brought him JFK with Kevin Costner.  Another Oscar winner.  A Steven Seagal movie, Under Siege, in 1992 that was actually nominated for two Oscars.  Then Guarding Tess in 1994 with Shirley MacLaine and Nicolas Cage.

The stars Dye worked with are so famous that I am not putting in their life dates!  I will add the movie release dates just to jog your memory. 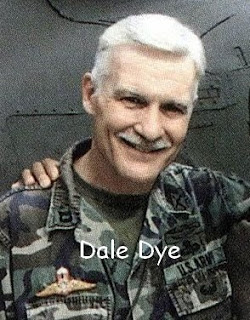 Natural Born Killers (1994) a controversial movie starring Woody Harrelson, breaking out of his "Cheers" comedy mold.  In Outbreak (1995) Dye worked with Dustin Hoffman, Rene Russo, and was able to arrest Donald Sutherland at the end of the movie.
Mission: Impossible (1996)
Starship Troopers (1997)
Saving Private Ryan (1998)
Rules of Engagement (2000)
"Band of Brothers" in multiple episodes
He even voices about ten video games.  I wonder how much money there is in that?
Captain Dye has made quite a good living on the skills he learned in the Marines.  His company is called Warriors, Inc. and he has a good web site as well.

A big thank you to him for making movies like Saving Private Ryan so realistic.  I think it is important to bring the horrors of war to the screen, along with the heroism.
Posted by Bit Part Blogger