After writing this blog for a while, I am still trying to figure out the best way to go about it.  As I look back, there seem to be three basic formats that I use.  I can choose a Bit Actor or Actress and write about him or her.  I can choose a movie and write about the Bit Parts that made that movie something about which to write.  Or I can write about a famous star and the Bit Players who surrounded the star.  The last one works best for earlier actors such as Charlie Chaplin or Laurel and Hardy.

I think the movie format may be the most satisfying.  Many of the people I write about are not well known, and you may pass the blog if I title it Kevin Peter Hall (1955 - 1991).  Who was he?!?  Well, Kevin was the actor who played the Predator (and also the helicopter pilot) in Predator (1987) with Arnold Schwarzenegger.  He was in only 21 roles on film and TV in his short life.  He died of Aids at age 36.

Kevin was Harry in Harry and the Hendersons (1987) and also in the TV series in the 1990s by the same name.  His very first role was as a mutant bear in Prophecy (1979).  He has also played other aliens and monsters.  What would these movies be without a talented 7' 2" actor in the extensive makeup? 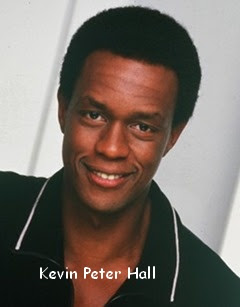 The Governor's Movie is, of course, Predator.  Schwarzenegger is governor of California and Jesse Ventura (b. 1951) was governor of Minnesota, and both of them find themselves in the jungle fighting Kevin Peter Hall.  Arnold wins...Jesse dies.  Kevin really doesn't look the type!
Who else was in Predator?  Sonny Landham (b. 1941) played Billy, the Native American soldier (also killed).  Landham has 57 roles listed on IMDb.  In the 22 years since Predator he has only made 17 films.

The girl who played Anna was Elpidia Carillo (b. 1961) and she is very popular in Mexico.  She has a total of 55 roles listed, and she does appear on TV shows such as "Miami Vice" and "ER" in the USA, plus some other movies with big stars, Beyond the Limit and Under Fire in 1983, and Things You can Tell Just by Looking at Her (1999) with an all star cast.

Other than Elpidia and Arnold, pretty much everyone else in the movie dies.  So let's look forward to a better weekend!
Posted by Bit Part Blogger