I may assume that some of my readers are young, say under 40, and may not be familiar with silent films.  Some may have never even seen a silent.  If you haven't, you are missing a lot and should seek some out.

Mann played a prizefighter in Chaplin's last silent film, City Lights (1930).  He had already made several talkies by then.  He also appears in Modern Times (1936) and The Great Dictator (1940). 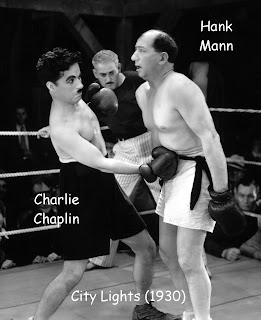 He made many great movies.  Mr. Smith Goes to Washington, Meet John Doe, The Maltese Falcon, Yankee Doodle Dandy, Arsenic and Old Lace, and On the Town.  In his last ten years of acting he made 90 films.  He made 19 films in 1951 alone.
He made four films with Abbott and Costello, seven with Jerry Lewis, two with Bob Hope, and five with James Cagney.

Hank Mann is another great Bit Actor who helped make the movies what they are today.
Posted by Bit Part Blogger