As a child I used to listen to my parent's records.  Many were 78 rpm discs that we played on the old RCA console, and later my father (who worked at RCA in Camden, NJ) added a turntable to play 33 and 45 rpm records.

Lili had many of those 1950s actors and actresses that nobody remembers.  It also included Zsa Zsa Gabor (b. 1917) as a magician's assistant, also in her fifth film.  I would classify Zsa Zsa's role here as a bit part.  Zsa Zsa has had quite a career as a film sexpot.  One scene in Lili has Zsa Zsa and Leslie dancing, each wearing the same dress.  It was clear who had the more voluptuous figure.  We hope Zsa Zsa makes a good recovery from her recent illness.
Mel Ferrar (1917 - 2008) played one of the love interests, the puppeteer.  He is an accomplished actor/director/producer with 105 roles on IMDb.  He was married for a time to Audrey Hepburn.  Lili was his seventh film.  Look for him in later hits; The Longest Day (1962), Sex and the Single Girl (1964), and on TV in "Falcon Crest." 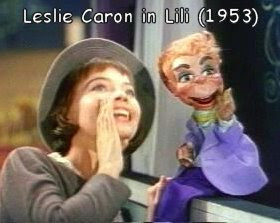 As I watched the credits (and I always watch the credits!) I was surprised to see Amanda Blake (1929 - 1989) in Lili as Peach Lips.  I didn't recognize her, but she must have been one of the magician's other girls.  Amanda Blake was Miss Kitty on "Gunsmoke," among over 40 other roles, including A Star is Born in 1954 with Judy Garland.  I should watch for her on screen.
It is a shame that this film is so forgotten.  It is not readily available on DVD and I was fortunate to catch it on TCM. Robert Osbourne called it one of the biggest sleepers of all time.  Search for it if you can.  It is a magical film with great music (the music one an Oscar) by Bronislau Kaper (1902 - 1983).  Kaper wrote the score for over 130 films from 1930 to 1972, including White Cargo (1942), Gaslight (1944), The Red Badge of Courage (1950), Them! (1954 - the giant ant movie, remember?), BUtterfield 8 (1960), and Mutiny on the Bounty (1962).  Best of all is Leslie Caron interacting with the puppets, who come alive for her and for the viewers.
Posted by Bit Part Blogger