Percy Helton was pretty much my definition of Bit Actor.  He had a very long career, appeared in a multitude of roles on film and TV (over 200 by IMDb's count), almost always had a speaking part making him more than an extra, and he is unforgettable.

He started acting at age two in vaudeville and became acquainted with George M. Cohan who used him in several plays.  His film career started in 1915.  After service in the First World War, he returned to the stage.

In the late 1930s he started making films again, and it was his role as the drunken Santa Claus in Miracle on 34th Street in 1947 that really got him noticed.

His short, round figure and his hoarse, high voice almost guaranteed him a speaking part.  By 1950 you could see him on TV.  He worked with Bob Hope, Bing Crosby, Dean Martin, Jerry Lewis, Bud Abbott and Lou Costello in both mediums.

He was at home being cast as an old man, a judge, or a town drunk in a western.  I think that 1953 and 1954 were his best years in film, before his TV accomplishments started.  Look for him in these great movies -
Call me Madam, The Robe and How to Marry a Millionaire in 1953
A Star is Born, White Christmas and 20,000 Leagues Under the Sea in 1954

He began showing up in everything on TV.  Early parts included "Gang Busters," "Waterfront," "The Lone Ranger," "The Millionaire," "December Bride," "Circus Boy," "Father Knows Best," "Death Valley Days" and MANY others, just in the 1950s decade. 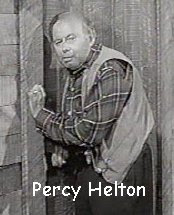 In the 1960s he was in several episodes of "The Untouchables," "Lawman," "The Real McCoys," and he appeared quite a few times in "Alfred Hitchcock Presents."  But he wasn't finished in Movies.

In 1962 he was the train conductor in The Music Man.  In 1964 he was the funeral director in Hush, Hush, Sweet Charlotte.  Much more TV during this decade, and then at age 75 he was Sweetface, the old man who tries to misdirect the railroad agents away from Butch Cassidy and the Sundance Kid in 1969.  This was his last major motion picture.  He is credited with two releases after his death, but I am not familiar with those.

His last TV gigs in 1971 were on "Mission Impossible" and "Nanny and the Professor."

Check out his complete list on IMDb, and start making your own list of Percy Helton movies and TV shows you've seen!
Posted by Bit Part Blogger