I suppose the Dead End Kids were stars when their first movie Dead End came out in 1937.  The movie was a filmed version of the Broadway play by the same name, with basically the same young actors.  Huntz Hall and Leo Gorcey are the names I most connect as Dead End Kids, but of course there were others and I may cover some of them in later posts.

The group was also known as The Little Tough Guys, The East Side Kids and The Bowery Boys.  They were apparently difficult to control while on the set, so they really lived their parts.  In about 21 years, more or less together, they made almost 90 films at four different studios.

Huntz Hall (1919 - 1999) made a total of 116 movie and TV appearances.  He was in 67 films together with Leo Gorcey from 1937 to 1966.  Since Hall was best known as a gang member to the public, it was easy for him to create the same character in most of his films.  He even used the same name in many of them, some with just the same first name.


In later years he was truly a bit actor.  He appeared in "Flipper" on TV, he had a part in Herbie Rides Again in 1974, but it went downhill from there.  1976 - Won Ton Ton, the Dog Who Saved Hollywood; 1979 - Gas Pump Girls; and 1992 - Auntie Lee's Meat Pies.  Not very big hits.  According to a biography poster on IMDb, Hall did OK with his income because he owned a percentage of The Bowery Boys pictures. 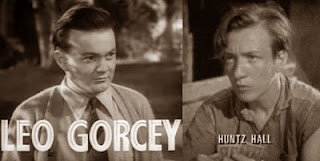 Leo Gorcey (1917 - 1969) has a total of 90 roles.  Almost his entire acting career was spent as one of the "boys."  After The Bowery Boys series of movies ended for him in 1956, he was on TV twice, then appeared as a cab driver in It's a Mad, Mad, Mad, Mad World in 1963, and his last film was with Huntz Hall in 1966, called Second Fiddle to a Steel Guitar.  The Bowery Boys went on until 1958 without Gorcey.
Even though these guys had fame and did make a living, I can't help but feel sorry for them in a way.  Leo Gorcey was married five times.  His first wife left him and married Groucho Marx.  Huntz Hall (married thrice) was arrested several times over the years, but he eventually straightened himself out.  I guess they played their parts to the limit.
Posted by Bit Part Blogger