You may tend to think of great Bit Part Players as mostly being in the classic movies of the 1930s to the 1950s, but there are many who are working hard, even as we speak...or rather, blog.

A familiar face on the screen, large and small, is Dwight Schultz.  Born in 1947, he has so far been involved in 149 roles.  These include TV, movies, voice overs for animation, and also video game voicing, starting on TV in 1981.  His first movie was a small part in The Fan (1981) with Lauren Bacall and James Garner.

His big break came two years later when he was cast as Howling Mad Murdock on "The A Team" starring George Peppard.  That job lasted four years.

In 1989 he had a major part as J. Robert Oppenheimer in Fat Man and Little Boy with Paul Newman.  There has been a lot of physics in my post this week, and more to come!  Of course, Oppenheimer was in charge of the Manhattan Project to develop the first atomic bomb.

More movies and TV appearances follow, some good, some not so good.  Then, in 1990, another good break as he is cast in "Star Trek: The Next Generation" as an engineer, Lt. Reginald Barclay.  He played in five episodes on the series, but with Star Trek there is always a future.

In 1996 he reprised his role in Star Trek: First Contact.  Isn't it interesting how you can show history in a movie simply by going back in time?  Star Trek does it so nicely (and frequently).  This movie takes us back to when the first warp drive spaceship left Earth, just to fill in the historical details.  The Borg encounter was just filler.

From 1995 to 2001 we find Reg Barclay in "Star Trek: Voyager" with Kate Mulgrew.  I do miss Jeri Ryan as Seven of Nine!  (I always wondered why they gave her high heels in space.)  Scultz also had Star Trek employment in 2003 as the voice of Reg Barclay in an animated program and later in some video games.  If you do well your first time on S.T., you can make a career!

Interspersed with all of the Star Trek were quite a few TV shows and movies, and a lot of voice work including direct to video releases. 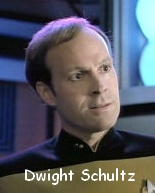 I hope he could read the script to keep it all straight!

Schultz appeared in the 2010 remake of The A-Team, and is currently working on a cartoon series called "Chowder."  This Bit Actors isn't finished, I hope.
Posted by Bit Part Blogger