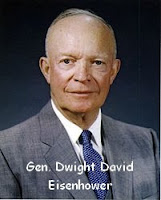 IMDb shows that there have been 28 roles for Ike, with about 19 different actors playing the part.  We watched I.Q. from 1994 last night, and Keene Curtis (1923 - 2002) was the Ike choice in that film.  I.Q. is a light rom-com starring Meg Ryan and Tim Robbins with Walter Matthau playing Albert Einstein.  Curtis acted on the stage, screen and on TV was best known as John Hill who owned the restaurant upstairs from "Cheers."

According to IMDb, Eisenhower was first played by Harry Carey, Jr. in a 1955 John Ford movie called The Long Gray Line, starring Tyrone Power.  In 1962's smash hit, The Longest Day, he is played by Henry Grace.  It was the only movie that Grace acted in, but he was the set decorator for almost 200 other movies and TV shows.

Robert Duvall, Richard Dysart and E. G. Marshall all played Ike in the 1980's.  Tom Selleck was Ike in 2004 on TV in "Ike: Countdown to D-Day."  A look at the cover of the DVD shows Selleck without hair or a mustache, but I guess you have to make sacrifices for your job.

There are a few others, and I think there are some who deserve their own listing on my blog, due to the variety or volume of work they did on the screen.  Maybe I should have started with George Washington.

Here's to The General of the Army, Dwight D. Eisenhower.  An interesting historical note.  Because congress bestowed five stars on Eisenhower and some other generals during WWII, they had to come up with a higher honor for George Washington.  He is now known as "The General of the Armies."
Posted by Bit Part Blogger