I know, everyone who is familiar with classic films has heard the name Regis Toomey.  Can you name five movies he's been in?  QUICK!!!  He has 264 roles to his credit on IMDb, starting in 1929 and continuing for 58 years!

He started out on the stage and in musical productions.  His early films included many leading roles, but as the years went by, he found himself in more supporting parts as a character actor.

His first film was Alibi in 1929 with Chester Morris and Mae Busch.  Of course, Mae is a favorite of Laurel and Hardy fans.  Toomey worked with her again in 1934's Picture Brides.  Half of his filmography is in his first two decades of film acting. 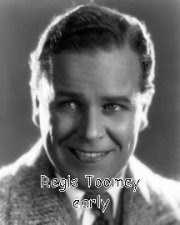 He made three films with James Cagney including G-Men in 1935, The Big Sleep with Humphrey Bogart in 1946, two with Edward G. Robinson, three with Gary Cooper including Meet John Doe in 1941, etc.  Toomey was also starring in his own films, while working with these greats.  But by 1940, he was slipping down the cast list and occasionally took an uncredited role.

He worked with Cary Grant in His Girl Friday (1940) and The Bishop's Wife (1947).  In 1945 he appeared in Alfred Hitchcock's Spellbound with Ingrid Bergman and Gregory Peck.  He was uncredited in Show Boat in 1951.

In the early fifties he worked in a few teleplays.  Television must have been an easy way to continue some income, but he didn't stop making movies.  In 1953 he had a small part with John Wayne in Island in the Sky, and then with The Duke again in 1954's The High and the Mighty.

More films followed, and increasing parts on TV.  Guys and Dolls in 1955 was probably his last major film.  He found regular work in TV westerns and other series' such as "The Loretta Young Show."  He appears several time on "Cheyenne" and "Walt Disney's Wonderful World of Color." 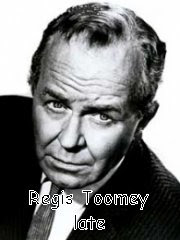 His best TV roles came in the sixties, and would have been on "Burke's Law" with Gene Barry where he played detective Les Hart, and he appeared on "Green Acres" as a doctor, who then found himself in a recurring role on "Petticoat Junction."  Not a bad place to be, in a very popular series.

He had a few more TV and movie roles, and his last film was Evil Town in 1987 about "a crazed scientist creating an army of zombies."  Not a great way to end a career.

Now do you remember Regis?  I know you have seen many of his pictures, or you wouldn't be reading my blog.
Posted by Bit Part Blogger