I had fun writing about Eisenhower yesterday, so today I took a look at which actors played Albert Einstein.  Over 63 years, and in multiple countries and languages, there are 109 portrayals of Einstein listed on IMDb.  A popular character! 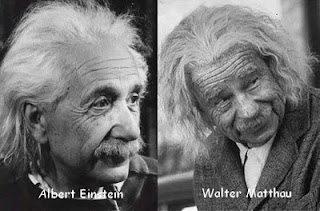 And the part has attracted a wide range of actors.  Ludwig Stossel took the lead in 1947 in a Brian Donlevy movie called The Beginning or the End, about the development of the bomb.  A lot of character actors followed, plus some you may not expect in the part.
I saw the names Robert Downey, Jr., Rene Auberjonois, Arte Johnson (!), Walter Matthau as mentioned yesterday in I.Q., Elliott Gould, Maximilian Schell, and he was voiced in the animated film, Firedog this year by Tom Berenger.  (I have no idea what Albert Einstein has to do with a movie about a dog overcoming fear of fire to save his friend's father.)
If Arte Johnson isn't odd enough as Einstein, how about Andrea Gall in a movie from 2002 called The Ten Rules: A Lesbian Survival Guide.

One name caught my eye...Yahoo Serious played Einstein in his 1989 movie, Young Einstein.  He has a strange name so I looked at his bio on IMDb.  The writer says, "Yahoo Serious (born Greg Pead) became one of Australia's most successful independent conceptual artists and filmmakers of the 1980s and 1990s."  Pretty serious stuff.  Then I looked at his filmography. 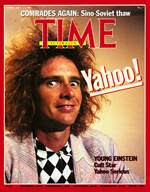 For that body of work, he was on a Time magazine cover.  I hope it pays the bills.  I'll try to be more serious tomorrow.
Posted by Bit Part Blogger