I hadn't seen Madame Curie in quite a few years, and last night, just as I turned on Turner Classic Films, it had just started.  Fortuitous!

Greer Garson and Walter Pidgeon star in the 1943 biopic about the woman who discovered polonium and radium, and also coined the term radioactive.  (I told you we weren't finished with physics!)  Obviously, Curie set the stage for many things to come in the world.

But I am interested in the movie, and especially the bit parts.  Let's look.

Lastly, I want to mention Frederick Worlock (1886 - 1973) who had an extra's part in Madame Curie.  He made over 100 movie and TV appearances.  It looks like he may have been acting on the stage early in his career.  His first film was in 1914, and then he works in one in 1928, then again in 1939.  He must have been doing something for work between films, or just waiting for them to perfect sound recording. 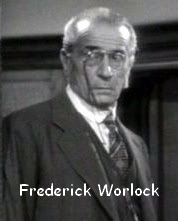 After the slow start, he appears in loads of big movies.  The Sea Hawk in 1940 with Errol Flynn, Dr. Jekyll and Mr. Hyde with Spencer Tracy in 1941, Air Raid Wardons with Laurel and Hardy in 1943, six Sherlock Holmes films with Basil Rathbone, plus National Velvet, The Picture of Dorian Gray, Joan of Arc in 1948 with Ingrid Bergman, then into TV starting in 1951.
He appears in several episodes of "Alfred Hitchcock Presents" and a lot of the early teleplays on TV.  In 1960 he was in Sparticus, and the next year he did voices in One Hundred and One Dalmations.  His last role was as a passenger on the ill-fated plane in the 1970 hit movie, Airport.

I have seen almost all of the above mentioned films, and I couldn't tell you what Frederick Worlock looks like!  I found a pic to help you, good readers.  I guess that makes for a great Bit Actor.
Posted by Bit Part Blogger