Another Frank Capra film, State of the Union, followed in 1948 with Tracy and Hepburn.  In 1950 Bacon starts work in television, but many more great movies looked to him for his talent.  The same year he worked with Bing Crosby again in Mr. Music and the next year in Here Comes the Groom.  That was a span of almost 20 years of working with Bing, starting with The Big Broadcast in 1932.

Irving Bacon was a perfect choice for my blog and a great Bit Actor.
Posted by Bit Part Blogger No comments:

Bacon started working in silent films, and made almost 70 films at the Mack Sennett Studios.  While many silent movie stars had difficulty moving into sound films due to heavy accents or poor voices, Irving Bacon flourished.  By that time, though, he had found his niche playing "regular Joe" parts as milkmen, mailmen, carnival workers, etc., which he continued for most of his career. 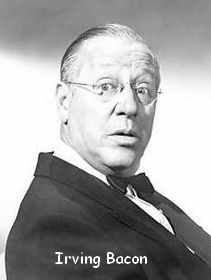 1940 starts with His Girl Friday and The Grapes of Wrath, plus 25 other movies that year.  This is going to be a long post!  Let's cover the war years and come back tomorrow.

Pick ANYTHING above that is in bold, and watch it!  You will not be disappointed.
Posted by Bit Part Blogger No comments:

Co-star Shelley Duvall (b. 1947) was perfectly cast for her role.  Duvall comes across as fragile, which was needed for her part.  If they had cast Sigourney Weaver (b. 1949), it would have been a different movie.  Weaver usually plays a much stronger character which would, in my opinion, not really fit for this kind of suspense film.  Watch her in Copycat (1995) where she is supposed to be a neurotic psychologist.  Then imagine Shelley Duvall in the same role.

Danny Lloyd (b. 1973) played the son, and only made one more film.  He now teaches science.

Crothers was in four films with Jack Nicholson, and four with Jerry Lewis.  He was also seen on many TV shows.  He has 115 roles listed on IMDb. 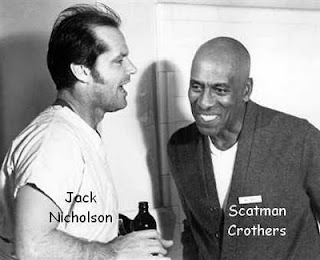 Yesterday I wrote about The Haunting (1963) as my favorite scary movie.  As much as I may jump while watching The Shining, The Haunting makes my skin crawl with horror.  It is a deeper kind of scared...much more personal.

If you think of The Shining, you think of Nicholson and Duvall, not the rest of the cast.  The entire cast is important, but in The Haunting the cast is much more balanced and reliant on each other.  No one character stands out.

My vote stays with The Haunting.  And BTW, The Haunting is Martin Scorsese's (b. 1942) favorite scary movie, too.
Posted by Bit Part Blogger 2 comments:

The Haunting, a black and white ghost story from 1963, remains one of the most respected Gothic horror films ever made.  The 1999 remake, with all its CGI work and star power, cannot hold a candle to the original.

The cast of The Haunting is not filled with unknown actors and actresses, but they are not what I would call superstars either.  Julie Harris (b. 1925) and Claire Bloom (b. 1931) have major roles, along with Richard Johnson (b. 1927), and Russ Tamblyn (b. 1934) who was hot off his role in West Side Story.

In smaller parts we see Fay Compton (1894 - 1978), and the ever popular Lois Maxwell (1927 - 2007) who played Miss Moneypenny for many James Bond flix.  These and almost every other part in the movie are small, but necessary to add more dimension, and every one of the cast is quite accomplished.  None of them, with the possible exception of Julie Harris, stand out, but they allow the ensemble to work together to achieve a classic performance.

The real star of The Haunting is the house, which was a real house for the outside shots, and the impressive interior sets which were created on a sound stage.  They used infrared film for many exterior shots to heighten the moody look.  Infrared film will darken the sky and cause trees to film as white.

And then there are the camera angles.  It is mentioned in the film that all the corners in the mansion are a little off to send you in the wrong direction, and the doors are hung so they won't stay open.  The low camera placement, and some quick shots and zooms accentuate this.

Lighting is also well conceived for every shot.  Faces appear in wallpaper as the light changes, and shadows are everywhere.  Different scenes can appear to be warm, or as cold as ice...and you feel it in your seat.

The use of sound is almost terrifying.  In one scene, the two young women are in their bedroom when a supernatural event unfolds.  Sounds are heard through the walls and in the hallway.  Is the door locked?  Did I see the door knob turn, ever so slightly?  Did you see the face on it?  "Who was holding my hand!?!?"

This is, without question, my favorite Halloween movie.  A decade ago, I watched this film alone, in my cold apartment, with just a candle for light.  (And a glass of Scotch.)  That October night was stormy, but the windows were closed.  My candle was extinguished when the movie was over.  I didn't sleep well that night.

Carlson is best remembered for his parts in sci-fi classics like Creature, but he didn't start making those films until well into his acting career...even after starting on TV.  His first real sci-fi was The Magnetic Monster in 1953.

The truth is that of his 103 titles, he only made four of the sci-fi movies on which his reputation is based.  Magnetic Monster, It Came from Outer Space (1953), Riders to the Stars (1954) and The Creature from the Black Lagoon.  Those movies and that time frame, the early 1950s, were all it took to start a new generation of baby boomers on the path to a lifetime of "Star Trek," Star Wars and other sci-fi movies and TV shows. 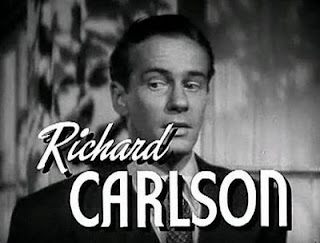 I remember Carlson in three educational films made by Frank Capra (1897 - 1991), "Hemo the Magnificent" and "The Strange Case of the Cosmic Rays" in 1957 and then "The Unchained Goddess" in 1958.  These were made for TV, but when I was in elementary school, they were shown as 16mm prints to the school.  They starred Frank Baxter (1896 - 1982) who played Dr. Research, and Carlson was along for the ride, with a bunch of animated characters as well.  They were great!

Carlson's later work included the TV series "Mackenzie's Raiders" where he was the star, and then he was basically a guest star on TV shows, like  "Rawhide" and "Bonanza."  His last film was Change of Habit in 1969 starring Elvis Presley (1935 - 1977) which was also Presley's last film.
Posted by Bit Part Blogger No comments:

I know...Blue Crush (2002) will never be a classic, except maybe for teenage boys.  Young girls in bikinis are all that is necessary for most teenage boys to like a movie.

After looking through most of the cast list, the names above are the only members who have more than 10 titles listed on IMDb.  Of course there were quite a few talented surfers to fill in the scenes and to populate the surfing contest, so they wouldn't have many other screen credits, but it seems almost everyone was simply chosen on location, most likely because they fit the surfing lifestyle profile.

Am I making sense?  Was Blue Crush a hit movie, or did it just have great advertising with hot bods on the beach?  The worldwide gross so far is over $52,000,000.
Posted by Bit Part Blogger No comments:

Two of my grandsons spent the night so we watched Harry Potter and the Chamber of Secrets (2002), the second installment in the Harry Potter franchise.  It had started on TV, so I threw in the DVD to start it at the beginning, and for some surround sound.

My guess for the most popular character in the series, other than the three leads, is Rubeus Hagrid, played in all of the Potter flix by Robbie Coltrane (b. 1950).  He has an easy going nature and he trusts his charges to be honest.  He also has a passing resemblance (except for the antithesis of hair) to Curly Howard (1903 - 1952) of the Three Stooges. Both are heavy and have a lovable, comedic personality.

I don't know if I can qualify Coltrane as a Bit Actor, but until Harry Potter and the Sorcerer's Stone (2001) he was relatively unknown in the USA, unless you were really paying attention.  He has 98 roles listed on IMDb.

He had a small part as a man in the bathroom in European Vacation (1985) starring Chevy Chase (b. 1943) and was in Revolution the same year with Al Pacino (b. 1940) and Donald Sutherland (b. 1935).  He is getting small part work in good movies, and good parts in lesser movies.

In 1986 he was in Mona Lisa where he had a bigger part opposite Bob Hoskins (b. 1942) and Michael Caine (b. 1933).  He has an interesting mix of roles, plus a lot of British TV, probably because he lives in England. 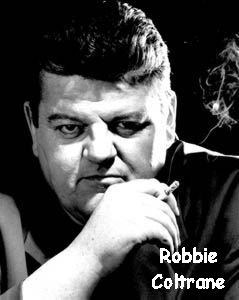 The part that brought him to the attention of the mainstream audience was as a former KGB agent in GoldenEye (1995), a part he reprises in 1999 for The World is not Enough.  ANY James Bond film will do wonders for your acting career.  He was noticed by none other than J.K. Rowling (b. 1965) herself, and at her suggestion Coltrane was cast to play Hagrid.

Of course making eight Harry Potter films in the same number of years would take a majority of your time.  But Robbie Coltrane continued to work in other projects.  We see him in Oceans Twelve (2004), The Brothers Bloom (2008) and he does a voice part in Tales of Despereaux, also in 2008.

He has had a hard life, worked out his problems, and made it into a complete success.  It would be interesting to see how much he made, just for his part as Hagrid.  I like him. He's the kind of actor I'd like to invite to dinner.
Posted by Bit Part Blogger No comments: