Here's another name you may not know. But he is a talented, hard working Bit Actor. Bill Cobbs (b. 1934) has almost 150 titles on his list on IMDb. And the variety of movies was a surprise to me as I looked through the list.

After beginning his acting career in the theater, his first film was The Taking of Pelham One Two Three (1974). That was the good one. He played a man on the platform, but it was a start. He plays small parts for years, and shows up as a bartender in Trading Places (1983) with Eddie Murphy and Dan Aykroyd. The same year he is a man in the lunchroom in Meryl Streep's Silkwood.

There is a good bit of television work interspersed with Cobb's movies. He does get his own series in 1989's "Homeroom" but it only lasts one season. In fact, every regular TV role for him was on single season shows. Most of his TV work consist of Bit Parts, but he also gets some meaty roles, such as "Decoration Day" a Hallmark production starring James Garner.

Cobb is close to 60 years old in the 1990s, and he starts doing action films! New Jack City (1991) and Demolition Man (1993). He plays 'old man' in both, but he was still younger than I am now! His aging brings him even more charisma. He is totally believable as a jazz musician in Tom Hanks' film That Thing You Do (1996), which was still just a Bit Part. 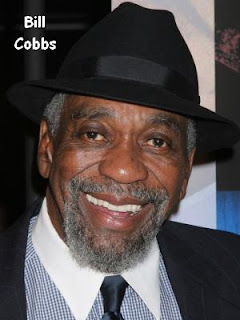 You may remember him as a guard in Night at the Museum (2006), but do you remember Three Days to Vegas the next year, or The Morgue in 2008? He is also in a touching story in 2006 called The Ultimate Gift. It shows off Cobbs' acting talent as he plays a corporate lawyer to James Garner.

In Cobbs' latest release, The Muppets (2011) he plays the grandfather. That's a role he can certainly warm up to in a film that received some recognition. It is nice that every photo you see of Bill Cobbs shows his big smile indicating satisfaction with a great career.

In my opinion, Cobbs is right up there with Ossie Davis and Morgan Freeman in the talent department. It is a shame that he has only one film award to his name. He won the Best Actor award at the Trenton Film Festival in 2006 for The Final Patient.
Posted by Bit Part Blogger 7 comments: