Was Marie Dressler a big star or a Bit Actress?  Well, both, actually.  Dressler was born in Canada somewhere between 1863 and 1971, depending on which account you read.  She started acting at age 14, and in 1892 made her debut on Broadway.

She was in a play written by Maurice Barrymore (1849 - 1905) who was the father of Lionel, Ethel and John, and great-grandfather of Drew.  That family has great genes!  Dressler later worked with Lionel and John Barrymore.

The early movie days were not well documented.  There are notes that Dressler started working in film in 1910, but IMDb shows her first film as the 1914 Chaplin film, Tillie's Punctured Romance.  There is a reference to Actors' Fund Field Day in 1910, with the cast all listed as playing themselves.  In any case, it is accepted that Mack Sennett was the one who got her into movies.  She may have had more small parts in early films.

Dressler made two sequels to Tillie, and a few shorts through 1918, and then found herself blacklisted from movie jobs because of an actor's strike.  In 1927 she was back in movies, cast in The Callahans and the Murphys.  She made a few more silent films, and returned to the stage to work with Edward Everett Horton (1886 - 1970).

As an experienced stage actress, Dressler was a prime choice for sound films.  Many silent stars lost their popularity when they had to speak, and Dressler was one of the lucky ones who already knew how.

Dressler was now the biggest box office draw of the time.  More hits followed.  Emma in 1932, Tugboat Annie and Dinner at Eight in 1933.  Those last two were again with Wallace Beery. 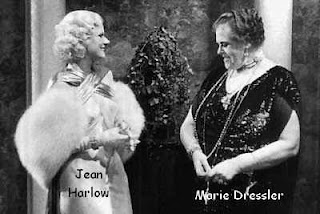 Dinner at Eight is one of the best films of the early sound era.  Jean Harlow is a very sexy 22 year old, married to Wallace Beery!  Let's see, he was 48 years old.  (No comment!)  Even though the casting was evenly divided among the stars, Dressler, Beery, John and Lionel Barrymore - Dressler dominates the screen when she is in a scene.  Her final comment to Harlow is classic.

Marie died of cancer in 1934, just a year after making Dinner at Eight.  So, was she a star or a Bit Actress?  She was a star, but she only made 29 films.  And she could hold her own with the Barrymores sharing the credits.
Posted by Bit Part Blogger 6 comments:

Whew!  I have finished adding labels to all of my posts.  And, by the way, this is post #250, in about 10 months of The Bit Part Actors Blog.  I started last May.

It was quite a task to add the labels.  I don't have unlimited time to devote to the job, but on the days I was not writing, I would go in and add to a few posts at a time.

I suppose I should have listed the names with the last name first, but you'll just have to deal with it!  A comma in the label field indicates the next label, so I couldn't add Bogart, Humphrey...it would be listed as two names.  I actually found that out the hard way.  I added the label for It's a Mad, Mad, Mad, Mad World, and had links to "It's a Mad," Two links to "Mad," and a link to "Mad World."  Gotta love it!

Then there is the problem of movies that start with "The."  Do I list The Dirty Dozen, or just Dirty Dozen.  You will have to look both places if you are looking for a title, because I wasn't very consistent.  As they say, "Consistency is the hobgoblin of foolish minds."  Or something is the hobgoblin...I don't know. 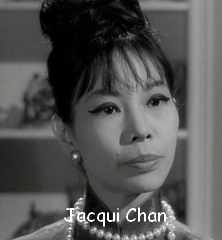 Back to my chosen topic.  The Bit Actress of the day is Jacqui Chan.  That's a great name for a martial artist, but she wasn't one.  She started out in 1955 and quickly made it into The World of Suzie Wong in 1960, and Cleopatra in 1963.  Her last big movie was Krakatoa: East of Java in 1969, but she continues to work.
A web search returns a lot of hits for Jacki Chan, so there are few details about Jacqui.  Maybe she is just a notch above an extra, but I'll put her in as a Bit Actress.
Posted by Bit Part Blogger No comments: