Marie Blake (1895 - 1978) was a Bit Actress later known as Blossom Rock.  I didn't know her real name was Marie Blake until a short time ago.  And Blossom Rock is best known as Grandmama on "The Addams Family."

She was born Edith Marie Blossom MacDonald, right here in Philadelphia.  Her younger sister, Jeanette MacDonald (1903 - 1965) became a bit more famous, making eight films with Nelson Eddy (1901 - 1967).  Jeanette only made 29 films, but Blossom made 101 appearances in film and on TV.

She worked in vaudeville with her sister, and then married Clarence Rock in 1926.  They moved to New York and worked on Broadway until MGM spotted Marie, er, Blossom and signed her to a contract.  At MGM they changed her name to Marie Blake.

Her first feature film was Thoroughbreds Don't Cry (1937) which was also the first pairing of Judy Garland and Mickey Rooney.  She would make another film with Garland and Rooney together, and two more with Rooney.  Her next film, released the same year, was Mannequin starring Joan Crawford and Spencer Tracy.  Not a bad start.

In 1938 she starts work as a switchboard operator with Drs. Kildare and Gillespie.  She stays until the end of that popular series in 1947, making 12 films with either Lew Ayres or Lionel Barrymore (another Philadelphian), or both.  During this period she even finds herself working in a few of the later MGM Our Gang comedies.

In 1940 she has a small part as a waitress in They Drive by Night with Humphrey Bogart and George Raft.  That same year she plays Miss Lulubell in Li'l Abner, a movie that I happen to have on DVD.  I'm not sure why.

She takes uncredited roles well into her movie career, and we can find her in Christmas in Connecticut, a 1945 Barbara Stanwyck film that is well worth owning.  Next time I watch it, I will look for Mrs. Wright, played by Blossom or Edith or Marie...but she isn't credited anyway.

Blossom started working in television in "The Life of Riley" in 1949, with Jackie Gleason in the title role.  William Bendix took over that role in 1953.  My guess is that Blossom was only in a very few episodes, but back then not everyone who acted was recorded by episode.  Did they think that television was a throw away commodity? 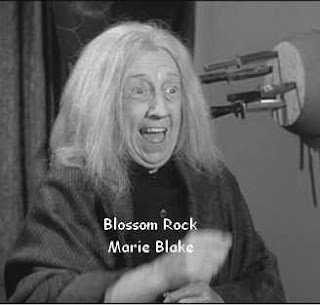 Television must have paid the bills because we see her name attached to quite a list of shows.  But nothing regular came along until "The Addams Family" in 1964.  It was a shame that she never appeared in a Jeanette MacDonald film, even though they both worked at MGM.  Now that I think back to Grandmama's speaking voice, she might not have fit in with Jeanette and Nelson!

Her final work is her most famous, at least with today's audiences.  "The Addams Family" has always been one of my favorite shows.  It is right up there with "The Dick Van Dyke Show" for humour mixed with touching and sensible family values.  I can forgive her for making films like Snow White and the Three Stooges (1961), and will remember her for her antics with Morticia, Gomez and Fester.
Posted by Bit Part Blogger 3 comments:

The Arrival of Charlie Sheen

The Arrival is a sci-fi flik about aliens setting up shop in Mexico and trying to prepare the Earth to be more hospitable to them when they finally take over.  It's called terraforming and they are raising the temperature of the atmosphere by shooting great balls of fire into the sky.  (And nobody seems to notice these things for some reason.)

The hero of the story is Charlie "I'm tired of pretending I'm not special" Sheen who is a radio astronomer.  He intercepts a signal from the aliens and is promptly fired by his boss, who happens to be one.  (An alien...not a signal.)  He then sets up his own radio telescope by re tasking all the satellite TV antennas in the neighborhood, for his own use.

The basic story is actually pretty good, but the details cause it to fall apart when you start to think about it in a scientific way.  Just to think that all those satellite TV customers would go without reception for more than a day is impossible!

Charlie acts quite disturbed all through this film.  Maybe it wasn't acting.  He looks very disturbed with a spiky haircut and a silly beard, not to mention those wild eyes.  Even his character's name is weird, Zane Zaminsky.

The rest of the cast is better, and some of the special effects are very good.  The aliens have a cool little ball that they can put in a room and suck everything in sight into it...including a huge radio telescope.  And when they run, they kink their legs backwards.

The short-lived love interest is played by Lindsay Crouse (b. 1948) as another scientist who discovered the same invasion, but she is killed by scorpions while Charlie is taking a bath.  Lindsay has 77 titles, including some very well known TV series' as a regular.  On the big screen you can find her with Paul Newman in The Verdict (1982).

Most of the cast appears to be Mexican, as the movie was largely shot on location.  In fact, this entire movie is populated by Bit Actors rather than big stars.

As much as I like to let people live their own lives and learn from their mistakes, I do believe that Charlie Sheen should seek professional help.  Please, Charlie, get some help!
Posted by Bit Part Blogger 2 comments:

In the series, the team of comedy writers played by Morey Amsterdam (1908 - 1996) and Rose Marie (b. 1923), really brought in the laughs.  But it was more than that.  Most of the series was filmed with a live audience.  That gives the actors a better gauge for the timing required for maximum laugh effect.  Plus, the creators and writers were the best.  How can you miss with the names Carl Reiner, Danny Thomas, Sheldon Leonard and Garry Marshall involved?

Rose Marie, who was 38 when the series began, was only three years old when she started performing in vaudeville as Baby Rose Marie.  She was a hit, and also worked in early radio.  Starting in 1929, after the talkies were no longer considered a fad, she made seven short films up until 1938.  She also appeared in International House in 1933 with a huge comedy cast.  She then went to radio full time.

The 1950s brought her back to the screen in Top Banana (1954) starring Phil Silvers (1911 - 1985).  I would imagine she wanted to stretch her wings a bit, and we see Marie in several dramatic TV shows including "Gunsmoke," and "M-Squad" which starred Lee Marvin. 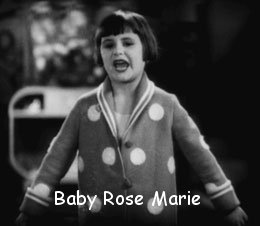 She is a regular on "The Bob Cummings Show" and then in a short lived series called "My Sister Eileen" before her big TV break with Dick Van Dyke.  Many more TV shows would be in her future after that triumph.

Let's look at her movies.  In 1966 she is in a James Coburn (1928 - 2002) film, Dead Heat on a Merry-Go-Round.  That was a crime/comedy/drama, so she would fit in well.  Her next movie was in 1974 called Memory of Us, with the father/daughter team of Will and Ellen Geer.  I haven't seen it, but I guess it was less than memorable, and Rose only played the housekeeper.

The next year she is in The Man from Clover Grove and that movie had the tag line, "It's Supersonic Comedy, out of Remote Control!" so you can guess how good it was.  She did get to work with her friend Richard Deacon in that one. 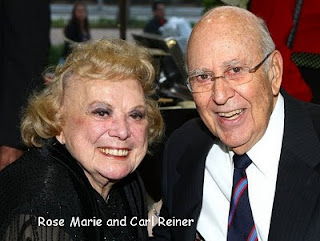 I would have liked to see Rose Marie in more dramatic roles.  She has an interesting face that was still photogenic as she aged, and her resume shows that she has all the experience any casting director could want. I guess we will have to be happy with all of her small screen work, which is considerable.  And someday I will pick up the entire "Dick Van Dyke Show" set because that is just about the best thing she was ever in.
Rose Marie now has 71 titles listed on IMDb, plus another huge number of appearances as herself on various TV shows and documentaries.  She is also active on the stage.  After her short life as a child star, she would become a favorite Bit Actress on TV and in film.
Posted by Bit Part Blogger 2 comments: