J. Pat O'Malley was in everything

It should be a household name. At least in any house that had a TV in the early days of television. I am referring to J. Pat O'Malley (1904 - 1985). His face and voice are instantly recognizable, as are so many other Bit Actors.

Before TV and after some small movie roles, his first major role in a feature film was Lassie Come Home (1944), and it was nice to see he also appeared in "Lassie" on TV in the late 1950's. Since many classic film buffs are in the baby boomer generation, you will recognize O'Malley in many Walt Disney productions. His first was The Wind in the Willows (1949) and the same year he voiced a part in The Adventures of Ichabod and Mr. Toad with a cast that including Bing Crosby, Basil Rathbone and Eric Blore.

J. Pat started acting on television in 1950 according to IMDb. After reading his filmography (or videography if you prefer) it may be easier to list all the TV shows he was NOT in! Let's start with his Disney work, and I bet you have seen most of these. Remember, Movies are in BOLD and "TV work" has "Quotes." 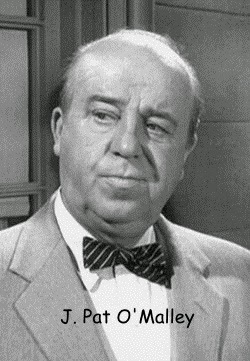 O'Malley also worked for other studios. Here are just some of his better films.

The Fastest Gun Alive (1956) starring Glenn Ford.
Courage of Black Beauty (1956) was the second Black Beauty film. This one starred Johnny Crawford who went on to co-star in "The Rifleman." The first was in 1946 with Mona Freeman.
The Long, Hot Summer (1958) starring Paul Newman and Joanne Woodward.

In 1961 J. Pat stars in Blueprint for Robbery, a comedy about an armored car robbery in Boston. And there were more films, but not much of note. He appeared in Hello Dolly! (1969) but he was only a policeman in the park. It seems like he was stuck in his character actor mode. He is so recognizable when he is on screen, that he must have had to keep to smaller roles in bigger films.

By far, O'Malley made his mark on the small screen. Take a minute to glance at the (more or less) complete list on IMDb. I guarantee that your favorite TV show had J. Pat in it at least once. He was the uncle, the grandfather, the doc, or just a shopkeeper. And not just in sit-coms. He was in every genre you can think of, from westerns to "The Twilight Zone."

J. Pat O'Malley fits right in with Bit Actor heavyweights like Parley Baer and Henry Jones. You gotta love all they have given us.
Posted by Bit Part Blogger 2 comments: