Today is Presidents' Day 2012. Presidents' Day was an evolutionary federal holiday, starting as Washington's Birthday first set by congress in 1879. It was celebrated each year on Washington's actual birthday, February 22. Some states celebrated Lincoln's Birthday as a holiday on February 12th, but it was never a federal holiday by Act of Congress.

Members of congress in the 1950s originally toyed with the idea of making March 4th a holiday to honor all of the presidents, since that was the original election day. It didn't get very far because it would have meant February 12, February 22, and March 4 would then all be holidays. 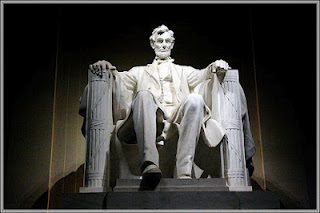 I had fun in July 2011 going through the films depicting George Washington. I have mentioned some films where Lincoln is honored but not in detail, so let's look at Abraham Lincoln (1809 - 1865) in the movies.

There are over 300 titles listed for the character Abraham Lincoln on IMDb. More than twice those for Washington. Perhaps being assassinated is more desirable for a movie than dying of a cold. Either way the end is the same. Both presidents gave their all for our country and I would be hard pressed to say which was the better man. They tie on my list...both at Number One.

Lincoln's character is in quite a few silent films. There are several films listed in the early part of the second decade on the 20th Century starring Ralph Ince (1887 - 1937) and Francis Ford (1881 - 1953). Ince was also a director but had a long film career, including Little Caesar (1931) starring Edward G. Robinson. Ford was John Ford's older brother and he appeared in almost 500 films and television shows. A true Bit Actor, many of Ford's roles were uncredited.

The first talkie to show Lincoln was Two Americans (1929) starring Walter Houston (1883 - 1950) as Lincoln. From what I have read, Lincoln's actual voice was fairly high and squeaky. For public speaking he would tend to start on a high note in his voice to attract the attention of his audience, and then let the voice lower a bit to where it was more comfortable. I have often wondered how many actors got that right.

Two Americans was produced by Paramount, and the next year Walter Huston is Lincoln again in D. W. Griffith's production called Abraham Lincoln. This was meant to be a biography, but in 1930 my guess is that the story may have been embellished a bit to make it more enjoyable.

In the 1950s television brought Lincoln to the small screen, and many actors tackled the part. My favorite may have been Royal Dano (1922 - 1994) in the series "Omnibus." Dano has a great, deep voice, absolutely wrong for Lincoln, but perfect for his story on TV.

Here are some interesting titles where you can find Lincoln on TV.
"Alcoa Presents: One Step Beyond"
"The Twilight Zone"
"The Rifleman" 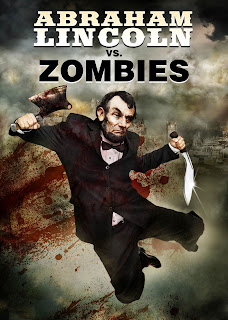 "Doctor Who"
"The Ed Sullivan Show"
"The Time Tunnel"
"Star Trek"
"Love American Style"
"The Muppet Show: Sex and Violence"
Is nothing sacred?!?

A bit later we see Lincoln as the respected, dignified person he really was. In 1985 Hal Holbrook (b. 1925) played Lincoln in the series "North and South," and let's not forget the 1990 Ken Burns series "The Civil War" starring Sam Waterston (b. 1940) as the voice of Lincoln.

This year there are two releases to note here. Abraham Lincoln vs. the Zombies with Bill Oberst, Jr. (b.1965) and Lincoln starring Daniel Day Lewis (b. 1957) and directed by Steven Spielberg. I'll stick to the second one.