I Have Ned Glass Stuck in My Memory

I was tuned in to Encore Westerns again, this time to watch a "Gunsmoke" episode, and I caught the credits of "Have Gun, Will Travel."  There it was, the name Ned Glass, and it brought out a hidden memory.  I couldn't place him, but I knew I had seen that name more than once.  Time for some research.

Ned Glass (1906 - 1984) was a very popular Bit Actor, mostly known for his television work in the 1950s, '60s, and '70s.  He started out as an extra in many mid-1930s movies.  After the McCarthy era, when he was blacklisted, he was able to restart his career and found some roles that showed his true acting ability.

During the few years when it was tough to find work, he was helped by his friend Moe Howard.  Of course, that meant making six Three Stooges shorts!  In his early movies, he usually played a bank teller or a clerk, or some other small part.  His physical stature made him perfect for that.

I noticed the title Storm Warning (1951) starring Ginger Rogers and Ronald Reagan with Ned in it.  I haven't seen that one, but it may be worthwhile.  The same year he made The People Against O'Hara starring Spencer Tracey and Pat O'Brien.  It sounds like Glass' career has really started by then.

Every title Ned has in this era is filled with stars.  Come Back, Little Sheba (1952) with Burt Lancaster, The Bad and the Beautiful (1952) with Kirk Douglas and Lana Turner, The Clown (1953) with Red Skelton, Julius Caesar (1953) with Marlon Brando (and Tom Powers!), The Caddy (1953) with Martin and Lewis...Ned Glass is in them all.  I am sure that his part, no matter how small, contributed to these movies and to the reputations of the stars as well.

Ned kept busy during the television era, but still filled in with movies like King Creole (1958).  He shows up as a ticket seller in North by Northwest (1959).  In 1961 he has a noticeable dramatic role in West Side Story as Doc, the shop owner where Tony works.  Then an even bigger role in Charade (1963) as one of a trio of bad guys with George Kennedy and James Coburn. 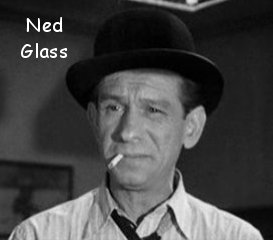 I suppose as he started to age, television was easier work.  He still appeared in film, but not as frequently.  Look for Ned in The Fortune Cookie (1966) and Save the Tiger (1973), both with Jack Lemmon, and he is a toll booth attendant in The Love Bug in 1968.

His last film was a low budget item called Street Music (1981), and he then appeared in an episode of "Cagney and Lacey" a few years before he passed away.  All in all, Ned has 207 titles listed on IMDb, and I am glad I remembered his name.
Posted by Bit Part Blogger 6 comments:

Powers made over 40 silent films, including an uncredited part in Gertie the Dinosaur (1914), an early animated short.  He worked until 1917, and then went to the theater, becoming a playwright and actor.

In 1944 he was asked to be the murder victim in Double Indemnity starring Barbara Stanwick and Fred MacMurray.  That started another film career for him.  He made 26 films in the 1940s alone.

He worked with James Cagney and William Bendix in The Time of Your Life (1948), an unusual film for Cagney.  Other great stars were in many of his films (or was it the other way 'round?) but for some reason, almost all of his films just missed the mark and never became big box office hits.

How about this?  He had a small part in We're Not Married (1952) starring Ginger Rogers and Marilyn Monroe.  Powers even worked with Dean Martin and Jerry Lewis in Scared Stiff (1953).  His television work was never regular, but he had gigs on "The Lone Ranger" and "Superman" among several others.