I am always fascinated by a good voice.  Some of my all time favs in the movies are the great voices of Basil Rathbone (1892 - 1967) and Andy Devine (1905 - 1977).  Right up there with them is Thurl Ravenscroft (1914 - 2005), a name not well known, but an unmistakable voice that probably hundreds of millions of people have heard, mostly without knowing it.  He is as famous for uncredited roles as Marnie Nixon (b. 1930) is for all of her ghost singing in major musicals.

While not strictly an actor, Thurl was a singer and voice artist in more than 50 titles from 1940 to 1998.  Most frequently he worked for Walt Disney...in animated films and shorts, and also as a voice heard at the Disney theme parks.

In the late 1940s he starts a singing group called The Mellomen.  They worked in films and provided backup for singers as diverse as Bing Crosby, Elvis Presley and Arlo Guthrie, not to mention Spike Jones.  You can hear Ravenscroft and The Mellomen in Cinderella (1950), Alice in Wonderland (1951) and Peter Pan (1953).

In 1954 The Mellomen appear in The Glenn Miller Story with James Stewart.  He was also the singing voice for Stewpot, played by Ken Clark, in South Pacific (1958). 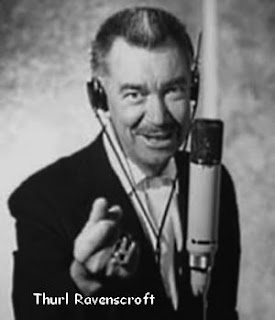 I am not sure I have heard this, but he is listed as a voice singing in Butch Cassidy and the Sundance Kid (1969).  I'll have to dig that one out and listen more closely.  And more Disney features, The AristoCats (1970) and The Many Adventures of Whinnie the Pooh (1977).

So the next time you find yourself at Disneyland or Walt Disney World, listen for Thurl's voice in everything!  The Tiki Room, Pirates of the Caribbean, as the lead singer in The Haunted Mansion song Grim, Grinning Ghosts, and calling 'All Aboard' at every train station.

This time of year, you can't go more than a few feet from a radio without hearing Thurl singing You're a Mean One, Mr. Grinch! from the 1966 TV short "How the Grinch Stole Christmas!"  And his most famous part, also uncredited, is as Tony the Tiger for all the commercials for Frosted Flakes cereal.  I told you that you knew him!  He was Grrrrreat!