Last month a new collection of sound Laurel and Hardy films was released by Vivendi Entertainment.  Laurel & Hardy The Essential Collection includes all of the boys talkie shorts and many of the Hal Roach feature films.  Missing are silent films and the later 20th Century Fox films.

I bumped into a great write up by one of my heroes, Leonard Maltin on the MovieFanFare blog, which is part of Movies Unlimited.  I would be lost without Maltin's Movie Guide.

I have written several times about The Boys, and also about Richard Bann, who was instrumental in bringing the collection out.  Dick Bann was also heavily involved with the restoration of these films through the efforts of UCLA Film Preservation.  Since Dick is one of the most knowledgeable film historians in this area, he was able to guide the restoration of all of these films to include the original logos and titles.

Many original 35mm prints were recovered, and the quality of these films (which I have not yet seen) is supposed to be incredible. 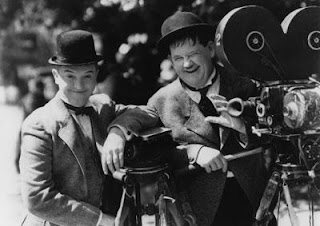 My love of Laurel and Hardy goes back to my youth, watching them at The Keswick Theatre in Glenside, PA on Saturday afternoons.  I also watched them on our old RCA 12" black and white television in the 1950s and 1960s.

Then, in the later 1970s, I joined The Sons of the Desert, the international Laurel and Hardy appreciation society.  Now I could watch the films at meetings in 16mm prints on a large screen.  Many of those prints were rather poor dupes, though, so the quality was hit or miss.  The movies were always great!  One meeting was held at the Keswick, and we were able to rent a 35mm print.  That was a treat, especially because I was in the projection booth that night.

Some of the films started being released on video tape and then on DVD.  But these were usually made from the old television prints, and again, quality suffered, as well as content.  The television versions were not the same as the theatrical releases, but that's all that was available.

Dick and others have also recorded commentary tracks for some of the films, and there are also quite a few special features included to make this collection a must-have.

I suggest that you first read Dick Bann's article on the official Laurel and Hardy web site, and also check out the UCLA Film Preservation site.  Just click on my links.  Make a donation to UCLA, then write down the "Laurel & Hardy The Essential Collection" on  your holiday wish list.  Santa may be kind to you.  I am hoping he is to me!
Posted by Bit Part Blogger 4 comments: