I used to work with a fellow named Greene. He used to say his name had three E's, not all in a row. I remember Richard Greene (1918 - 1985) from his long running television show, "The Adventures of Robin Hood" That ran from 1955 to 1960. I will always remember his soft, elegant voice. As I grew up and started watching old movies (the good ones), I instantly recognized him.

His first role on the big screen was in a 1934 Gracie Fields (1898 - 1979) film, Sing as We Go. Fields was a popular British singer, but Greene only had a Bit part. In 1938, Greene was signed with Fox and came to America. His first film here was Four Men and a Prayer (1938), directed by John Ford and starring C. Aubrey Smith, David Niven, George Sanders, Loretta Young and Greene. It was the start of a good career for Greene. 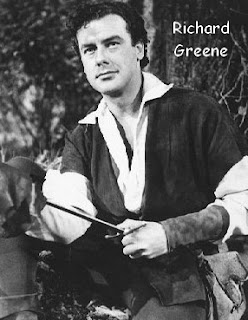 Richard would star in a few films in his early career. He took top billing in Submarine Patrol (1938) and Kentucky (1938). The next year he worked with one of the biggest stars in Hollywood, Shirley Temple in The Little Princess, and also in the first film that paired Basil Rathbone and Nigel Bruce as Sherlock Holmes and Dr. John Watson, The Hound of the Baskervilles.

Through the war years and into the late 1940s, Richard continued to make good films. Some were historical, some were war films, and there were some musicals and comedies thrown in. Perhaps it was the war that effected his popularity, maybe it was his considerable good looks, but he was put into some costume dramas, and pretty much got stuck as a swashbuckler.

Forever Amber (1947) seems to be the start of these movies. It stars Linda Darnell and Cornell Wilde. Next Greene finds himself in The Fighting O'Flynn (1949) with Douglas Fairbanks Jr. In The Desert Hawk (1950) he plays another swashbucker, along side Yvonne DeCarlo as Princess Scheherazade, Jackie Gleason as Aladdin, and Joe Besser as Prince Sinbad. That was some imaginative writing and casting.

This was the time that Greene started working on the small screen. By now, the non-costume movies Greene is making are starting to feel like soap operas. Richard is as handsome as ever, resembling any good doctor/heart throb on "General Hospital." (He never appeared on that one.) But there is something about that suave, British accent that puts me to sleep without some action to go along with it.

At a time when he was just about out of money, with popularity waning by the minute, he was offered a television role as Robin of Locksley in "The Adventures of Robin Hood." IMDb lists 143 episodes of the show from 1955 to 1960.

Almost the entire cast of Robin Hood was unknown to American audiences (Donald Pleasence did appear a few times), but the show was a hit. It made Richard a rich man. He did make a few more movies and TV shows, notably (but sadly) some Fu Manchu movies with Christopher Lee.

After that Greene mostly stayed in retirement and raised horses on his Irish estate. But I can still hear the theme song from Robin Hood!
Posted by Bit Part Blogger 6 comments: