Last night was the spring banquet for the local Sons of the Desert group, and I was there.  It's good to see old friends again.  Hopefully you remember that the SoD is the Laurel and Hardy appreciation club. and we have "tents" all over the world.  The Philadelphia, PA chapter is the Two Tars Tent, each city having a tent named after one of the films.

This time we had a magic theme to the evening.  We started out with a documentary on the later films, made at 20th Century Fox and MGM.  Then we toasted the boys and some friends and sang the SoD theme song.  Next came a wonderful buffet dinner, with a showing of a Three Stooges film that had nothing to do with magic.

A live magician was next, and he gave us a great show, astounding us with card tricks.  To end the meeting, we screened A-Haunting We Will Go (1942).  While not one of the boy's best film's, it was quite enjoyable.  The camera tricks were a bit over the top and took away from Laurel and Hardy to an extent, but the film still works.

Laurel and Hardy were still a big draw at the box office, some 21 years after they first appeared in The Lucky Dog (1921), although not as a team back then.  The film also featured Dante the Magician, as I mentioned a few days ago.  He was quite good and obviously felt at home on the stage or screen. 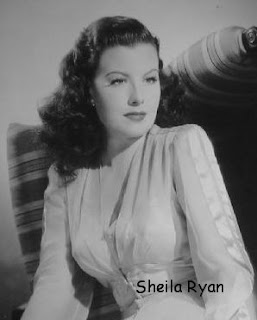 Sheila has 62 acting credits on IMDb, starting in 1939.  She was in The Gay Caballero (1940) with Cesar Romero, Dressed to Kill (1941) with Lloyd Nolan, and Sun Valley Serenade (1941) with the Glenn Miller Orchestra.  Her first work with Laurel and Hardy came in Great Guns (1941) and then A-Haunting We Will Go.

She made four movies with Gene Autry, I wonder if that's where she met Pat, and also appeared multiple times on his TV show.  Looking at the titles in her later movie career, she was mostly in B-movies.  Her last film was Street of Darkness (1958), starring Robert Keys (1921 - 2004).  (Who?)

As Dante's assistant in A-Haunting, she was perfect, and could not be any prettier.  You can be part of the Sons of the Desert.  Just send me a private e-mail and I'll get you in touch with your local Grand Sheik.  bitactors@gmail.com  It is a load of fun and very educational about these older films, and the Bit Actors as well as the stars.
Posted by Bit Part Blogger No comments:

The famous D.W. Griffith (1875 - 1948) film, The Birth of a Nation, was released in 1915, which is the 50th anniversary of the end of the Civil War.  We will not go into the controversy surrounding the film, because this is a blog about Bit Actors.

In 1912 her big break came when Griffith cast her in The Sands of Dee, a movie that Mary Pickford (1892 - 1979) was supposed to get.  This led to The Birth of a Nation, and then a starring role in Intolerance: Love's Struggle Throughout the Ages in 1916.  Those two are arguably the most famous silent films made in America.

After Intolerance, Mae left Griffith and started working for Samuel Goldwyn (1879 - 1974).  Her career faltered after that.  She made quite a few more silents, but none were the big hits she had with Griffith.

With the advent of talkies, Mae went back to work as a character actress, which made her a very famous Bit Actress.  She was approaching 40 years old by then, so starring roles would go to younger actresses. 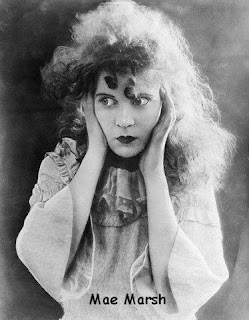 Her list of sound films is impressive, but she is uncredited in many of them.

Plus, State Fair, Miracle on 34th Street, Fort Apache, The Fighting Kentuckian, The Gunfighter, The Quiet Man, The Robe, A Star is Born, The Searchers...Holy Cow! what a list.

Her last two films, both uncredited roles, were Donovan's Reef (1963) and Cheyenne Autumn (1964).  She worked with John Wayne in eight films, but she only did a few TV westerns around 1960.

Mae Marsh was a star.  And I am glad we have her in so many great films, if only in Bit Parts.
Posted by Bit Part Blogger 5 comments:

This coming Friday will be the next banquet for The Two Tars Tent of The Sons of the Desert.  The SoD is, of course, the Laurel and Hardy film appreciation society, formed in part by Stan Laurel himself.  Each city has a Tent named after one of the films, and the one in Philadelphia is Two Tars.

This week will include a screening of A-Haunting We Will Go (1942) starring The Boys.  This is one of their last films, and was made at Twentieth Century Fox, after they left Hal Roach.  It is not considered one of their best films, but it is worth seeing.

The film is about L&H getting involved with con men and a magician.  The magician is played by real life magician Dante.  Dante the Magician was considered one of the best.  He was born in Denmark as Harry August Jensen (1883 - 1955) (possibly spelled Jansen).  He was also the last of the large traveling magic shows in the USA.  He often said, "Sim Sala Bim" during his performance.

His career as an entertainer started when he was about 16 years old, and he was quickly recognized as talented.  He was given the stage name Dante by Howard Thurston (1869 - 1936) in 1925.  Thurston was, at the time, the premier magician in the world.  Thurston was more well known than Harry Houdini (1874 - 1926). 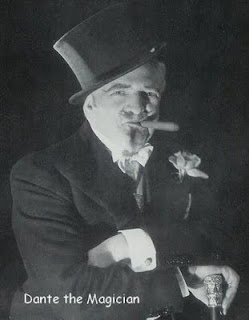 In film, Dante first appeared as himself in a Swedish film called Dante Mysterier (1931).  Next came A-Haunting, and then two more films; Bunco Squad (1950) from RKO Radio Pictures, and The Golden Coach (1951) made in Italy.  Of his four performances on screen, A-Haunting would be the best choice to see a good movie, but my guess is Dante Mysterier would be the best to see Dante.  (If you can find it.)
Another great Bit Actor we will see in A-Haunting We Will Go is Elisha Cook Jr. (1903-1995) who made more than 200 titles in his career.

At this banquet we will also partake of a sumptuous buffet dinner, and then be entertained by a real life magician, who performs in the style of Dante.  We will raise a glass to Dante, Stan and Ollie, and some other friends, and then park our camel and have one for the road.
Posted by Bit Part Blogger 2 comments: