A Request from Me

As it says on the right side of the Bit Part Actors Blog, my three year old grandson has Cystic Fibrosis.  This is a short commercial to ask for your help.


He is, on the outside, a healthy, fun loving three year old.  He has an older sister, and the best parents in the world.  He also has CF.  It is a disease that somehow he inherited from both his mother's and his father's genes.  Neither side of the family knew they had the gene, so this was a complete surprise to everyone.  Luckily, all young children are tested for CF in their first year, so it was caught early.

Here is the good news.  Our family lives in the Philadelphia area, and we have Children's Hospital of Philadelphia within a short drive.  CHoP is considered the best hospital for children in the USA.  Also, Cayden's mom is a pediatric nurse, and there are a considerable number of nurses in our family to call on.  His grandparents on both sides are also very helpful.

Both of Cayden's parents have great, understanding bosses, so the frequent trips to CHoP have not caused a huge problem.  That doesn't mean they aren't a drain on everyone's stress level.  His daily care at home is also quite a lot of work.  And luckily, his insurance has been pretty good.

Here is my short request.  The Great Strides walk to benefit Cystic Fibrosis is coming up on April 30, 2011.  I am asking you to please take a look at the link below and consider donating to help defeat CF.  The link goes to the page I have set up, and the donations shown there are mine for this year.  I have it set up to automatically charge my card ten bucks a month.

I hope you will click on the "Click to Donate" button at the top of that page.  If you can give five or ten bucks, that would be great.  More would be better, and an automatic charge can be set up any way you can handle.  This money does not go to my family, it goes to fight CF.


Here's the link - Great Strides Walk for CF
If you can't donate this month, maybe you'll keep it in mind for later.  Thanks.
Posted by Bit Part Blogger 4 comments:

Not everything centers around Hollywood or even the West Coast.  There are two small events coming up soon in Southeastern Pennsylvania, which is strangely enough, where I live.  Both are inexpensive excursions into the Silent Movie Era.

First up is 2:00 p.m. on Sunday, April 10, 2011 at the famous Colonial Theatre in Phoenixville, PA.  Yes, that is the theater where the 1958 hit movie The Blob was partially filmed.  To benefit the Theatre Organ Society of the Delaware Valley, they will be showing five silent shorts accompanied by the newly renovated organ.

Sadly, they don't say which five silent shorts, but they do mention Laurel and Hardy, Charlie Chaplin and Buster Keaton.  Those four men made hundreds of films, and many were silent shorts.  Let's hope they pick your favorites for the show.  It doesn't really matter much, since the admission is only ten bucks and the proceeds benefit the Organ Society.

Later on in the summer, July 8 to 10, is this year's Blobfest.  Come on out for your chance to run out of the theater screaming.  After that show, you can drive out to the Downingtown Diner for some refreshments.  That's where the Blob was fried.  It's only about 15 miles away.

Then, on Saturday, May 14, 2011, come to Montgomery County Community College at 8:00 p.m. for the Betzwood Silent Film Festival.  The Betzwood Studio was located near Norristown, PA, and the site of the interior studio and lab is about a mile from where I live now.  It was a 350 acre ranch of early movie mogul Siegmund Lubin (1851 - 1923).  Check my Blog label list on the right for more about Lubin and Betzwood.

This year will be a showing of westerns, accompanied by Don Kinnier on the organ.  It's not a theater organ, but Don is incredibly talented at bringing silent films to life.  Hosting the event, as always, is Lubin biographer, Joseph Eckhardt.  Make sure you pick up his book, The King of the Movies: Film Pioneer Siegmund Lubin

, and bring it along for an autograph.

I will be there once again.  Look for me with my copy of his book!  And this show is only eight bucks.
Posted by Bit Part Blogger 2 comments:

Yesterday I was able to catch a 1975 Robert Mitchum (1917 - 1997) movie called Farewell, My Lovely.  It was a Phillip Marlow detective story, so I had to watch it.  About half way into the movie he finds himself kissing Charlotte Rampling (b. 1946), in her home, as her husband pops in.  Oops!  Rampling plays Velma, the villainess.  (Is that a word?  My spell checker doesn't seem to think so.)

While the movie wasn't the best I've seen of Marlow, it wasn't bad.  Bogart is more intense, but Mitchum brings a more intelligent portrayal, and the movie sticks to the style of a detective novel in the 1930s.  Mitchum is definitely one of the best for this genre, and this one is definitely worth seeking out.

Charlotte Rampling first came to my eye in The Verdict (1982), a courtroom drama starring Paul Newman.  In that movie, she was also not very nice.  She tried to throw Newman off track by seducing him.  The Verdict is well worth viewing, but it does come off as a little dated.

Rampling was born in England and educated in France, so she is well spoken and well educated.  She became a model, and that led to a part as a water skier in The Knack...and How to Get It (1965).  That led to better parts in Georgy Girl (1966) and several TV programs. 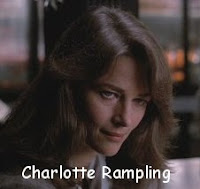 In 1980 she stars with Woody Allen (b. 1935) in his movie, Stardust Memories.  Later on she was in the 1988 remake of D.O.A., starring Dennis Quaid (b. 1954).  That one would never live up to the original 1950 film noir classic starring Edmond O'Brien.  Rampling has some 95 titles on IMDb, and she is still working.  That's should give you ample opportunity to find her.

Sadly, Farewell, My Lovely isn't available on DVD or BluRay.  The link above goes to Amazon for a download, which is OK if your computer will play to a decent television.  Also sadly, Charlotte Rampling is not a big star...but she is talented, and is still a very good looking woman.  She was beautiful in The Verdict and Farewell, reaching for (and achieving, in my book) an early Lauren Bacall look.  She is a Bit Actress, and a good one.
Posted by Bit Part Blogger 4 comments: