It is almost time to ring in a new decade.  I will probably be taking the next two days off from my Blog, but I will check in to see any comments that may show up.  Now, what to watch during the holiday weekend?!?

There are more movies that take place, at least in part, during a New Year's Eve party than you would think.  Here are my two suggestions.  Please watch them in this order.

The Poseidon Adventure (1972) is first.  From the hey-day of disaster films, and with an all star cast, the movie starts at the New Year's Eve party, and everything goes down from there.  (Sorry!)

Poseidon won the Oscar for Best Music, Original Song.  It also received a special achievement award for visual effects, and it was nominated for seven other Oscars.  Now tell me, how often have you heard the song, The Morning After since 1973?

I think all the Bit Actors they hired to make the film died in the first 15 minutes.  At least they got to the party.

In the Bit Part category, we see Leslie Nielsen as the ship's captain, just a few years before he decided he should be a comedian.  We also see Sheila Allen, wife of producer/director Irwin Allen.  Basically the rest are listed as Man, Woman, or Falling Man in the cast list.

Finish the evening with When Harry Met Sally (1989).  This is Meg Ryan and Billy Crystal at their best.  Carrie Fisher has a good part that can help you get over her Star Wars role as Princess Leia.

The movie winds through the lives of a man and a woman who knew each other in school.  As the years go by they keep getting together and drifting apart, but never as a couple.  Their frank interactions are unconsciously bringing them together, with no topic of discussion off limits for them.  The final scene is at the New Year's Eve party.

Again, there are no Bit Actors that easily stand out in this movie.  When you think about it, that is what a Bit Part is.  It should add to the feel of the movie without taking the attention away from the story or the stars.  There are 35 names below the main characters in the cast list, and I really don't remember most of them in spite of seeing the movie several times.

I do remember the couples being interviewed about their relationships.  That is a highlight of the movie for me.  They are all veteran actors and you believe they have all been married for a lifetime.  Their professional delivery in those scenes is heartwarming.

The Poseidon Adventure first so you can have a few drinks to help you through the disaster.  Then, try to time When Harry Met Sally so that you ring in the new year at the same time as Meg and Billy.  By that time in the movie, you are ready for a Happy New Year kiss.  And as far as New Year's Resolutions...just try to pay better attention to the Bit Actors!
Posted by Bit Part Blogger 2 comments:

Teahouse of the August Moon

I am still thinking about a good New Year's Eve movie to recommend, but The Teahouse of the August Moon (1956) came to mind for some reason.  It has nothing at all to do with the holiday, but it's a good movie, and any holiday is reason enough to watch a good movie.

Marlon Brando (1924 - 2004) was given top billing, and he did a stellar, out-of-character job with the part.  It is said that many people complained to the theater managers when the movie came out because they thought Brando wasn't in it.  In fact he has major screen time throughout the movie, but he is playing a Japanese character.

If you haven't seen the film, it is about the American occupation of Japan after WWII, and a team in Okinawa who are supposed to teach democracy.  Glenn Ford is sent to a small village and instructed to build a school house (pentagon shaped).  When he appears to be cracking up, his superior (Paul Ford) sends in Eddie Albert, a psychologist, to see what can be done.  They are both taken in by the villagers, and comedy ensues. 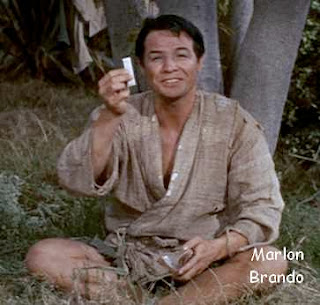 Junior's first movie was Tell Your Children (1936), which was re-released as Reefer Madness.  He went on to The Secret Life of Walter Mitty (1947) starring Danny Kaye, and in 1956 he appears in Forbidden Planet with Robbie the Robot (b. 1955).  Then a bunch of TV guest work.

That was fun!  Now go see The Teahouse of the August Moon and I am sure you'll agree.  If you still need a suggestion for New Year's Eve, please see this New Year's post at MovieFanFare.  That's a great blog, too.
Posted by Bit Part Blogger 4 comments:

I hope your Christmas was filled with movie memories.  I saw many DVDs and Blu-ray discs given out at my family gathering, and some liquid refreshment to go with it.  I came home with a very nice Kentucky bourbon gift.

Perhaps there was some over acting, but the movie is supposed to be the memories of Jean Shepherd's youth, seen after the years have embellished them.  Over acting was required to make it more fun.  The choice of music was interesting as well.  I noticed some Peter and the Wolf used when Ralphie and his friends encountered the neighborhood bully.

Of course Melinda Dillon was in Close Encounters of the Third Kind (1977) as her big role.  Close Encounters was the top grossing film of all time, until E.T.: The Extra-Terrestrial blew it away in 1982. My favorite scene of hers in A Christmas Story is when she is trying to get Ralphie's little brother to eat.

Darren McGavin always seemed to play the same character in everything.  No one will forget his expression of pride when he wins the crossword puzzle contest and receives his "major award."  I remember him well from his TV series, "Kolchak: The Night Stalker" in the 1970s.  His screen work started in 1945 and he has 180 titles in IMDb, mostly TV work.  In one movie role he played the gambler in The Natural (1984) but was uncredited. 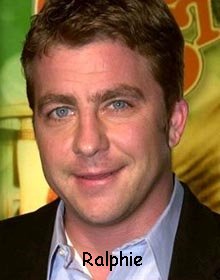 Ralphie was played by Peter Billingsley (b. 1971).  Cute is not enough to describe him in the movie!  Those blue eyes were captivating, and his expressions, priceless.  He was, at 12 years old, the star of the film.

Billingsley has been successful in Hollywood as a producer, director and actor.  He has 31 titles as an actor.  A Christmas Story was his fifth movie.  He produced ten titles, about half of them on TV, and he directed Couples Retreat just last year.

Most of the other children in this film didn't fair well in acting, except maybe Zack Ward (b. 1970).  Zack has 85 titles so far, although none of them are really big hits.  He makes a living, and that's the important thing.