Paul Newman was born in 1925.  After the war and his stint in the navy, he graduated from college and went to The Actor's Studio in New York.  His Broadway acting was successful, and led to some television and then movie opportunities.  I would say that he did everything right to start an acting career.

Oh, those early television days!  Paul started out in "Tales of Tomorrow" which is a show dim in my memory.  The series only aired for two years, but presented quite a variety of suspense stories, and an equal number of great actors.  Look for Boris Karloff, Gene Lockhart, Leslie Nielsen, Thomas Mitchell, Brian Keith and many others...if you can find the episodes to watch.  The Internet is your best choice here.  It is such a shame that the primitive production value of these early shows keeps them from becoming true collector classics.  Kinescope was the best they could do to preserve the moment.

Next up was a spot on "Suspense," another anthology series of suspenseful stories.  Most of the stars are the same as on Tales, but "Suspense" went on for a few more years, so add a few more stars.

Newman appeared on "The Aldrich Family" next.  He is listed on IMDb as an 'occasional cast member.'  All of these early roles were short term deals.  He wasn't much more than an extra, I am sure, but I haven't seen any of them.

He was on "You Are There" three times.  That was an interesting series hosted by Walter Cronkite (1916 - 2009) that attempted bring some history to TV land by taking the audiuence back to the time of certain events and interviewing the people who made it happen.  In one episode, Paul Newman was Plato!  OK.

Paul appeared a few times on "The Web," which had nothing to do with the Internet.  It was live presentations of mysteries.  All this time, he is making friends and watching the performances of some great stars. 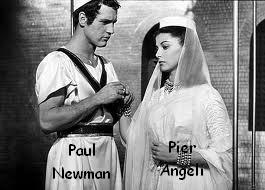 There were a few more television dramas before his big screen debut in The Silver Chalice (1954).  I think he was less than thrilled with the result of his first movie.  It was a box office disaster.  The film starred Virginia Mayo (1920 - 2005) and Jack Palance (1919 - 2006) in a drama about creating the cup of Christ.  It was so bad, that Newman took out a full page ad to apologize for his performance.

So Newman went back to TV for a couple of years.  He got to play Billy the Kid for the first time on "The Philco-Goodyear Television Playhouse."  We'll come back to Billy the Kid later.

His next film was a starring role, but I don't think Newman was a full fledged star yet.  He played Rocky Graziano in Somebody Up There Likes Me (1956) and got good reviews.

1958 was Paul Newman's golden year.  Four films that year.  The Long, Hot Summer; The Left-Handed Gun (yes, Billy the Kid again); Cat on a Hot Tin Roof; and Rally 'Round the Flag, Boys!  All hits, and two of them with Joanne Woodward (b. 1930) who would become his long time wife.

Paul Newman was no longer a Bit Actor.  The rest, as they say, is history.
Posted by Bit Part Blogger 4 comments: