The Bob Anderson (1922 - 2012) for today's post was basically a swordmaster and fight choreographer.  In fact, he is considered the finest who ever lived.  His name was brought to my attention while doing some research, and I found out that Bob just passed away on January 1, 2012 at the age of 89. 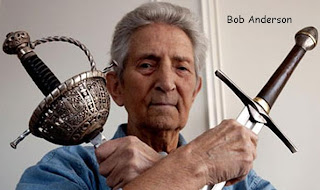 He did act in some TV shows and only a few movies, appearing mostly as a stunt double and rarely credited.  But he was involved in movie magic starting in 1953 when he coached Errol Flynn (1909 - 1959) in fencing for The Master of Ballantrae.  Before that Bob was on the British fencing team for the Olympics in 1952 after serving in the Royal Navy during World War II.

I don't know much about Bob, and there is little info on most of the usual web sites.  But if you have ever watched an action movie that had a sword fight, chances are Bob Anderson was involved.  Here are just a few of the films he helped along.  They speak volumes about how good he was.

In addition to being fight choreographer for the original Star Wars trilogy, he was David Prowse's (b. 1935 - portraying Darth Vader) stunt double for the light saber fights, and probably killed Obi-Wan Kenobi.  The later Star Wars prequels relied on CGI for many of the stunts, including Christopher Lee's (b. 1922) famous fight with Yoda in Star Wars: Episode III - Revenge of the Sith (2005).

Rest in peace, Bob.  Maybe its a guy thing, but I think you have brought a lot to the movies, and we thank you for it.
Posted by Bit Part Blogger 4 comments: