Here is a Bit Actress who needs to be recognized on my blog.  Her accomplishments were amazing, yet she never really became more than a Bit Part player in most of her movies.

Hattie McDaniel (1892 - 1952) was born in 1892 to former slaves, her father actually fought in the Civil War in the U. S. Colored Troops.  She graduated from high school in Denver, CO, and was able to get some work singing on the radio and recordings.  She is considered the first African American woman to sing on the radio.  After the stock market crashed, she worked as a waitress in a club in Milwaukee, and eventually became a regular on their stage.

McDaniel started as an extra or a singer in films in the early 1930s, with stars Lew Ayers, Una Merkel, Lionel Barrymore, Hoot Gibson and Marlene Dietrich.  It has been my thought that a novice in Hollywood could learn their trade by observing the more important stars in a film, and I am sure Hattie was no exception.

The next year she works with the biggest star in Hollywood, Shirley Temple, in The Little Colonial.  This was another chance to work with Lionel Barrymore (she made four films with Barrymore), and also with Bill 'Bojangles' Robinson.

If you have a chance to watch some of McDaniels' films in chronological order, you can probably see her refining and enlarging her 'Mammy' character.  She starts out as a maid, but slowly starts getting more confident in her ability, almost to the point of becoming confrontational.  You can see the changes between her part in Alice Adams (1935) with Katharine Hepburn and The Mad Miss Manton (1938) starring Barbara Stanwyk and Henry Fonda.

1935 saw her in China Seas with Jean Harlow and Clark Gable, then 1936 and Show Boat starring Irene Dunn.  Hattie plays Queenie and gets to sing again.  Another Harlow film, Libeled Lady (1936) with William Powell and Myrna Loy, and then a major role in Saratoga (1937), again with Harlow and Gable.  A busy couple of years!

She was in Vivacious Lady (1938) with Jimmy Stewart and Ginger Rogers, and in 1939 she worked with Oliver Hardy in Zenobia, one of the later films he made without Stan Laurel due to a contract dispute.  Hattie's roles finally settled back into less than great parts for Hattie as the years progressed.

After that big year, she continued to work hard, but in smaller roles.  She was in They Died with Their Boots On (1941) with Errol Flynn, and in 1942 in George Washington Slept Here with Jack Benny.  In 1946 she works for Walt Disney in Song of the South, appropriately.

She ends her acting career on TV, starring in a handful of episodes of "Beulah" in 1952, after replacing Ethel Waters in the role.  She would be replaced by Louise Beavers and soon after that she died of cancer.  She was the first African American to be buried in Rosedale Cemetery in Los Angeles.

Hattie McDaniel must have been quite a lady.  She was also active in charity work, and in bringing respect to her middle class community of Sugar Hill in Los Angeles.  Although she made quite a good salary for most of her work, she had a load of medical bills at the time of her death and left an estate of only $10,000.  Not fair for such an impressive actress.  She didn't just open doors, she knocked down walls for future generations.
Posted by Bit Part Blogger 4 comments:

I received a comment from film historian and writer, Richard W. Bann, about my last post requesting everyone to donate lots of money to film restoration.  Here is what he has to say:

"Time travel is an important component of my attraction to old films. Did all that talent realize they were communicating with millions of people not yet born at that time? Those of us who receive that communication today...how can we respond? We want to let these artists and technicians know they didn't do all that work for nothing. That we enjoy and honor the entertainment value, and that we treasure the living history they have unwittingly given us. And one meaningful thing we can do and one way we can respond is to support film preservation efforts. It is important to do so.


"Yes my essay will make some fans cringe. The story is painful; in fact it is worse than you know. I softened and concealed some of the worst incidents. And yes it is easy for us to look back and criticize the careless custodians of these treasures. We have some responsibility here too, however, because we have an opportunity now to be part of the film preservation effort at UCLA. If these films mean something to you, please get involved."


Pretty good thoughts, don't you think?  It shows his insight, as well as his love of movies.

I would like to add a few words about Dick Bann.  I had the pleasure of meeting him a few years ago at a Sons of the Desert meeting.  Dick is incredibly knowledgeable in all things film, and probably has one of the best jobs in the world. 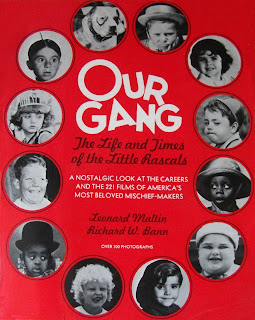 A quick search at Google Books for his name returns well over 800 hits.  He didn't write that many books, but his writing is easy to find.  He is also well known for his contribution to movie documentaries and other books about the film industry.

I have an autographed copy of his 1984 book, Our Gang: The Life and Times of The Little Rascals, which was co-authored by Leonard Maltin.  There is an updated version of that book, released in 1992, called The Little Rascals: The Life and Times of Our Gang.  Buy either one...they are very informative, including a section on where they are now.  (The Rascals...not Bann and Maltin.)

Bann has also co-authored several other books.  Here is a very short list -


As you can see, his interest in movies reflects that of many classic film buffs by covering some of the top people and studios in all of classic filmdom.

Dick Bann is also tapped as a source of reliable information for other authors and filmmakers.  He has helped on many documentaries, and you can find him quoted on many web sites as well.

According to IMDb, Dick has appeared as himself in two documentaries, a video short about Hal Roach's Rascals, and on the Playboy TV series, "Kendra."  (Dick is also a regular at the Playboy Mansion.)  He will soon appear in a documentary about Bettie Page (1923 - 2008) sometime this year, and is currently making one about Laurel and Hardy.

It is interesting to search for his name on the 'net, and then follow the links to read his various interviews, references and stories.  Many of these can be found at http://www.laurel-and-hardy.com/ the official web site for The Boys, or on other L&H devoted web sites.

In addition to the UCLA film restoration project, there are other institutions that do their part.  The Library of Congress is one of the biggest, although with limited money at the present due to the economic dilemma in the USA.  You can search the Internet for Film Preservation or go to the Wikipedia site for that topic for more info and other organizations.

I am thankful as well, to have Dick answer my e-mail questions.  I have limited resources and time to write my little blog, and getting the full poop from him has been very helpful.  I am sure he can now be included in the (more or less) exclusive club called - Bit Actors.