CMBA Hitchcock Blogathon Coming Soon to an Internet Near You!

On Monday, January 17, 2011, the Classic Movie Blog Association will have its second Blogathon.  The topic for members to write about will be Alfred Hitchcock, and I am sure you will see quite a variety of movies, topics and opinions covered.  The members of CMBA are quite wide spread, ranging from a 12 year old classic movie buff in England, to a young woman in Chile, and everything in between.

I have been a member of the CMBA since WAAAAY back in 2010, and I have found the members and their blogs to be very informative and entertaining.  This is the place to be for talk about movies.  I have even fostered some new friendships here, although I may never meet those new friends.  Such is the Internet.

This will be my very first Blogathon, and I will cover Hitch's 1955 sleeper, The Trouble With Harry.

I will post a list of the CMBA Blogathon entries on Monday in my post, so make sure you check out ALL of the other posts about Hitch and his work.  There WILL be a quiz! 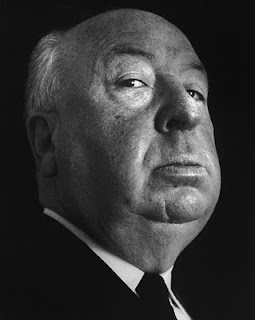 Or, Star Trek IV: The Search for Whales.  Released in 1986, this was the fourth Star Trek journey to the big screen.  It starred the original TV series cast.  There is no need to go into any more discussion about the stars.

My impression of this movie is that they were saving money by using time travel to go back to the 1980s, which allowed location shooting rather than expensive, futuristic sets, makeup and costumes.  "Star Trek" on television did this a lot in the early days.  But the story still works, if you are a Star Trek fan.  It has all of the normal interactions between the characters, and it adds some new faces.

Jane Wyatt has 93 titles listed on IMDb, from 1934 to 1992.  Her early successes include Lost Horizon (1937) which was nominated for the Best Picture Oscar, and won two others.

The advent of television seemed to be a good thing for Wyatt.  Her most famous role (at least for us baby boomers) was as Jane Anderson on "Father Knows Best."  In 1967 she is cast as Spock's mother, Amanda in an episode of "Star Trek."  The Voyage Home was her last motion picture.

Mark Lenard has 57 titles listed.  He did more work in the Star Trek franchise than Wyatt.  Not only was he Spock's father, Sarek, but he also played several other aliens.  His first appearance was as a Romulan captain, and he also played a Klingon.  Everybody knows he is really Vulcan.

Catherine Hicks (b. 1951) is the present day scientist who helps bring the whales back to the future.  (That sounds weird.)  Hicks also started on TV and had regular parts on "Ryan's Hope" and "The Bad News Bears."  She played Marilyn Monroe in the 1980 TV movie, "Marilyn: The Untold Story."  She was in some other good movies as well.  Look for her in Peggy Sue Got Married (1986) and Child's Play (1988).

Peters then appears in To Kill a Mockingbird (1962) with Gregory Peck.  He continues to work on TV and in movies, and does some voice-over as well.  In the 1990s he shows up in a regular role on "Star Trek: Deep Space Nine."

Star Trek IV: The Voyage Home may not be a perfect movie, but it is entertaining, and when you look at the Bit Actors involved, it becomes a good voyage.
Posted by Bit Part Blogger 3 comments:

Movies That Should Not Be Missed...TONIGHT!

Yesterday I received a Facebook invitation to participate in the Laurel and Hardy Marathon that begins this afternoon at 8:00 p.m. Eastern Time on Turner Classic Movies.  You don't have to ask me twice!

The full schedule can be found on the TCM web site by clicking on the schedule link near the top of the home page.  Then scroll to 8 p.m. and the first movie is Thicker Than Water (1935).  It ends tomorrow at 8 p.m., after running The Bohemian Girl (1936), starting at 6:45.
Here are my suggestions for the movies that you should not miss. Since this is an all night thing, get your DVR or VCR ready.

Jan 12  2:00 a.m. - Towed in a Hole (1932) - One of my favorites.  The boys have almost the entire film to themselves, with Billy Gilbert making an appearance.  Listen to Ollie's golden tenor voice singing the call to buy fish, and don't miss Stan's explanation of how to improve their business.  Not to be missed!

It's obvious that I like L&H.  It is difficult to recommend some films and not others because they are all worthy of watching.  Above are a dozen, with three that are simply not to be missed.

My only complaint is that the films are not shown in release order.  These are mostly short, two-reelers, with a few features like The Bohemian Girl thrown in.  Features like Sons of the Desert (1933) and Way Out West (1937) are also on the A-List of Laurel and Hardy movies, but I guess they will have to wait until the next marathon.

Enjoy these films.  They led the way for comedians who are still inspired by the genius of Stan and Ollie.
Posted by Bit Part Blogger No comments:

I guess it was unintentional that I should watch a steamy mystery that takes place during a Florida heat wave, on one of our cold and snowy weekends here in Philadelphia!  I watched Body Heat (1981) starring Kathleen Turner (b. 1954) and William Hurt (b. 1950).

This was Turner's first movie, and I must say it was also her breakout.  She was beautiful and totally convincing in her role.  The story has twists worthy of Hitchcock, although the filming wasn't as precise as Hitch would have demanded.  It was Hurt's third film, and he was also perfect in his part as the ill-fated lawyer.

Body Heat on the other hand, starred two newcomers to film, and was directed by Lawrence Kasdan (b. 1949) in his directorial premier.  But Kasdan has a load of experience.

Kasdan's friendship with George Lucas probably got him the job as director.  Lucas is uncredited on Body Heat as an executive producer.  After Heat, Kasdan directed more great films, including several mentioned above in his writing credits.

There were Bit Actors also present.  Kim Zimmer (b. 1955) was Kathleen Turner's best friend...whom she killed.  Zimmer is only in two big screen movies, and spends her time making TV soaps.  Ted Danson (b. 1947) plays another lawyer and is William Hurt's friend.  I don't think his soft shoe dancing at every free moment added anything to the plot.  This was Danson's second movie.

My question is how can so many inexperienced people make such a good movie?  See it, or see it again, and I am sure you'll agree.
Posted by Bit Part Blogger 5 comments: