Judy Greer and The Descendants

I finally got to watch The Descendants (2011) this week. It was a Best Picture nominee this year at the Academy Awards so I didn't want to miss it. While it certainly deserved the nomination, I still believe The Artist was a better choice for the honor.

George Clooney (b. 1961) was also nominated for Best Actor in this film. My guess is that, while The Descendants is a very good 'family drama,' it was just not a stand-out film, either in story or innovation. The Artist was.

My pick for Outstanding Bit Actress in this film was Judy Greer (b. 1975). Judy plays the pretty, red-headed wife of the man who was having an affair with Clooney's wife before her accident. As you know, I think Bit Players are much more interesting than stars and Judy has quite a nice career going. Let's take a look.

Judy started out studying Russian ballet, but then turned to acting in college. In just 15 years starting in 1997 she has amassed 80 roles in her filmography, including several recurring parts on television. In 1998 she landed a part in Kissing a Fool starring David Schwimmer (b. 1966).

She has an important role in Jawbreaker (1999) a dark comedy about teenagers starring Rose McGowan (b. 1973). I wonder why none of the teenagers in films like that are actually teenagers. Her first work with George Clooney, also 1999, is in Three Kings, a Gulf War film where she plays a correspondent.

She stars in an independent film called The Big Split in 1999. The next year she is cast with a few big stars in What Planet Are You From, directed by Mike Nichols. What Planet includes a chance to work with Garry Shandling, John Goodman, Ben Kingsley, Annette Bening and Greg Kinnear. Not a bad way to learn acting. 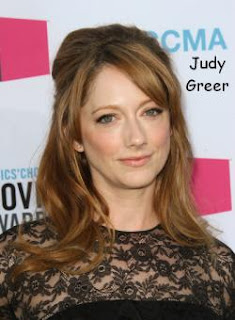 Greer makes a few more movies and is found in a one season sit-com called "Love and Money." She then gets a pivotal role in What Women Want (2000) starring Mel Gibson (b. 1956) and Helen Hunt (b. 1963) playing the file clerk, Erin, who helps Gibson in the movie. Another good film comes along in 2001 when she is in The Wedding Planner, starring Jennifer Lopez (b. 1969) and Matthew McConaughey (b.1969).

Of course you never turn down a change to work with Meryl Streep (b. 1949), so Judy takes a part in the Spike Jonze film called Adaptation. (2002) starring Streep and Nicholas Cage (1964).

Around this time Judy gets some more regular television work. Look for her in "Arrested Development," "Love Monkey," and "Miss Guided," if you can find them. Her more recent films include Love Happens (2009) when she dyed her hair so she wouldn't look too much like Jennifer Aniston, Barry Munday, Marmaduke, and Love and Other Drugs all in 2010, and The Key Man (2011).

More television after The Descendants keeps her busy and in view of a large audience with regular work in "Mad Love," "Glenn Martin DDS," "Two and a Half Men," and "Archer." She also appeared in a few episodes of "Californication."

I think we will see much more of Judy Greer. She has a career that many movie bloggers would love to live!
Posted by Bit Part Blogger 2 comments: