I received a suggestion (Thanks, Michael!) to write about Dabbs Greer (1917 - 2007), and it was one I couldn't pass up. One look at Dabbs' face, and I knew him instantly, although I doubt I ever looked up his name before. He was a guest star on many television shows, and a regular on a few.

Dabbs has over 300 titles listed on IMDb. His career spans 54 years, starting in 1949. His first five or so years in the movies was spent mostly as an extra and uncredited. Look for him as a cab driver in Father's Little Dividend (1951), as well as many other great films like Monkey Business and Million Dollar Mermaid, both in 1952.

By the mid 1950s he was starting to get on-screen credit. He was in the John Wayne, Donna Reed film Trouble Along the Way in 1953, and the same year in House of Wax, the Vincent Price classic. In 1955 he is a tutor in The Seven Little Foys starring Bob Hope.

The 1960s didn't see many films for Dabbs, but he is in Roustabout (1964) with Elvis Presley, and then two films with James Stewart, Shenandoah (1965) and The Cheyenne Social Club (1970). For the next decade or two, he mostly does television. His movies include White Lightning (1973) and Chu Chu and the Philly Flash (1981). 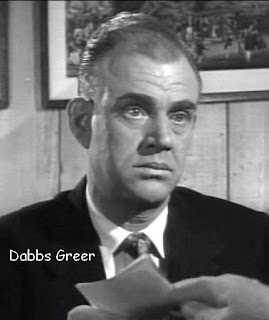 What Greer is best known for today are all the wonderful television shows he either guest starred on, or where he became a regular cast member. He was a regular on "Fireside Theatre," "Cavalcade of America," "You Are There," "Frontier," "Science Fiction Theatre," "TV Reader's Digest," and many other teleplays. According to someone on IMDb, Dabbs was the very first victim saved by George Reeves (1914 - 1959) as "Superman" on that series' first show in 1952. He would appear in Metropolis several more times.

During the era of family sitcoms and TV westerns, Dabbs was right at home as a friendly but grouchy neighbor, or a store clerk or reverend in town. But his face and demeanor worked well for sci-fi shows, too. You can find him on "Twilight Zone," "Kraft Suspense Theatre" and "The Outer Limits." (All the teleplays ended in 'Theatre' for some reason.)

Other spots on TV included "The Andy Griffith Show," "The Dick Van Dyke Show," "Perry Mason," "The Fugitive," "Bonanza," and "The F.B.I." He was a regular on "Gunsmoke," and "Little House on the Prairie" became his home as Reverend Alden for it's entire run. In the 1990s he was a regular on "Picket Fences" and ten years later on "Maybe It's Me."

Dabbs Greer once said, "Every character actor, in their own little sphere, is the lead." I couldn't have said it better!
Posted by Bit Part Blogger 4 comments: