And the full title is The Adventures of Buckaroo Banzai Across the 8th Dimension (1984).  BB has become a cult movie over the years.  In my opinion, it is because the cast was amazing, creative, and uninhibited.

I guess the first read of the script of BB, before auditioning for a part, would scare away any A list star.  Here we have a neurosurgeon/physicist who is also a test car driver and has a rock band (and no time for much else, I imagine), trying to prove that his overthruster will allow him to drive through a mountain.  I can't see Harrison Ford (b. 1942) jumping at that role.  And did I mention, all the bad guys in the movie are named John, and the good guys are all Hong Kong Cavaliers.

Ellen Barkin (b. 1954) is the love interest, Penny Priddy.  Barkin has had a few good roles, including The Big Easy (1986) and Ocean's Thirteen (2007), and she has won an Emmy Award.  I don't put much weight on the Emmy, because I appeared in an Emmy winning documentary once! 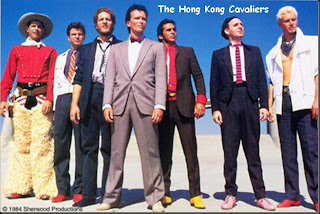 Lewis Smith (b. 1956) only has 29 titles listed on IMDb, starting in 1981.  He goes on to play Curly Bill in Wyatt Earp (1994) starring Kevin Costner, but mostly he does guest parts on television.  He played Perfect Tommy, well, perfectly in BB.

Just a few more names...Vincent Schiavelli (1948 - 2005) is another John (but he already looks like an alien), and Yakov Smirnoff (b. 1951) plays the National Security Advisor, of course.  The full cast list is long and distinguished!

The Adventures of Buckaroo Banzai Across the 8th Dimension is a complex film that requires some minor understanding of physics to at least get some of the theory, and a quick wit to get all of the inside jokes among the more obvious ones.  It is a film that must be seen more than once to fully enjoy it.  But if you are trying to make sense out of it, you may have to see it many more times.
Posted by Bit Part Blogger 8 comments: