Herbert's career in the movies started with The Fighting 69th (1940), and action film with a great cast including James Cagney and Pat O'Brien.  Anderson went on to work in many military films in the next two decades. Also in 1940 you can find him in Dr. Ehrlich's Magic Bullet starring Edward G. Robinson, The Sea Hawk with Errol Flynn and No Time for Comedy with James Stewart.

Herbert was in three movies with Cagney. The Fighting 69th, The Strawberry Blond and The Bride Came C.O.D., all made at Warner Brothers. Of course, being on contract at W.B. also meant he had to take what they gave him, so we also see Anderson in lesser movies like Knockout, Highway West and The Body Disappears, all in 1941. I haven't seen those.

I recently caught Dive Bomber (1941) on TCM with Anderson and Fred MacMurray. This was the time for movies to show how great our armed forces were, just before we entered WWII. Some others are Navy Blue (1941) and This is the Army (1943). But Anderson seems to be cast as a reporter a lot. I counted six films were he played that part.

He has a good part in The Male Animal (1942) starring Henry Fonda. After a couple of Dan Dailey movies, You Were Meant for Me and Give My Regards to Broadway, both in 1948, we find Herbert trying out the small screen. He was cast in an episode of "Your Show Time" called "The Mummy's Foot" in 1949. It also starred Phyllis Coates, who would go on to play Lois Lane in "The Adventures of Superman."

The changeover from the 1940s to the 1950s was an interesting era. The war was over. People were moving to the suburbs. Television was new and no one knew how much it would change the entertainment industry. I certainly wouldn't want to watch a blockbuster film on the 10" black and white RCA TV I grew up with, but it was OK for "Howdy Doody" and "Crusader Rabbit."

At this turning point there were numerous movies being pumped out by the studios. Many were still filmed in black and white, and these were considered B movies, to be shown along with a full blown, big star, feature. You will find actors like Herbert Anderson in many of these...if you can find them at all. And they included every genre you can imagine.

And of course, there were some top notch movies as well. Island in the Sky (1953), The Caine Mutiny (1954) and The Benny Goodman Story (1956) which were certainly not a B movies. The Caine Mutiny would be the second time Anderson worked with Fred MacMurray. 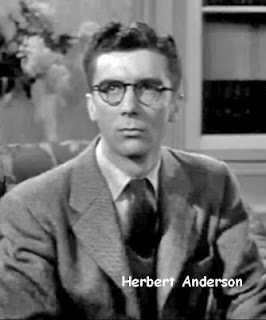 Herbert also worked on some teleplays back then, as he got his TV career moving. On "Ford Star Jubilee" in 1955 he was in "The Caine Mutiny Court Marshal" with Lloyd Nolan playing LCdr. Queeg.

He made a pair of movies in 1957 with Audie Murphy, Joe Butterfly and Night Passage. The later starred James Stewart. And to finish off that year on a high note, he appeared in My Man Godfrey.

From 1958 on, Herbert worked almost exclusively in television, with an occasional movie role. Look for him in everything from "The Real McCoys" to "The Millionaire." As mentioned above, "Dennis the Menace" was his most famous role, and that lasted from 1959 until 1963. His final TV appearance was in 1975 on "The Waltons."

Anderson's final three films spanned nine years. His last serious movie was Sunrise at Campobello (1960) starring Ralph Bellamy as Franklin D. Roosevelt. In 1966 he is in Hold On! which is a movie about the rock group Herman's Hermits getting a spaceship named after them. (No, I didn't see it!) And finally he is in a Disney picture called Rascal (1969) about a raccoon that befriends Bill Mumy.

In that final decade of television he must have had some fun. Who wouldn't when you get to work on "Petticoat Junction," "The Man From Uncle," "Batman," "My Three Sons" (his final work with Fred MacMurray), "Bewitched," "Green Acres," "Ironside," and "The Rookies." (Among quite a bit more.)