I happened on a broadcast of "Cheyenne" on Encore Westerns the other day, and decided to watch it.  I instantly recognized Andrew Duggan (1923 - 1988) as the villain, so here he is.  The episode was called "The Angry Sky" from 1958, and Duggan played a judge who was also trying to be a great criminal.  Good old Cheyenne Bodie, played by Clint Walker (b. 1927) figured it out in no time.

After some work on Broadway, Duggan started his screen acting career in teleplays in 1949.  I would say that he was best known as a guest star on over 100 TV shows.  He appeared on "Cheyenne" at least six times, but he also worked on the big screen.  He has 174 titles listed on IMDb, so let's look at some highlights. 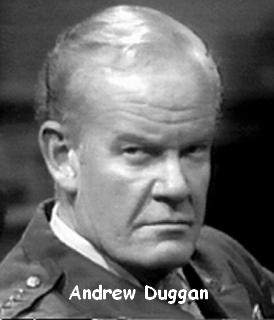 In 1959 he got his own TV series, "Bourban Street Beat" that lasted only one season.  Still, it was top billing.  Along at this time, he is listed as the trailer narrator for several films, including Whatever Happened to Baby Jane (1962).  After Bourbon was cancelled, one of it's spin offs, "77 Sunset Strip," provided Duggan with some guest work.  He also was the narrator for PT 109 in 1963.

A bigger hit for Duggan was Seven Days in May (1964) starring Burt Lancaster and Kirk Douglas.  Later in the 1960s he had a recurring role as Brig. General Ed Britt in "12 O'Clock High."

After playing many high ranking military officials, Duggan finally gets to play the president in James Coburn's spy spoof, In Like Flint (1967).  1969 brought his last starring TV role in "Lancer."  In 1971 he played John Walton in the TV movie, "The Waltons" before it was made into the popular series.

Somewhere in there he appeared on "M*A*S*H" as Margaret Houlihan's father, Col. Alvin 'Howitzer' Houlihan, and as a character called 'Hacksaw' on "Charlie's Angels."

Andrew Duggan's final movie was A Return to Salem's Lot (1987), which was not rated very good on IMDb.  All in all, I think he had a great career with a lot of varied work.  Although never a big star, he certainly qualifies as a great Bit Actor.  We can even forgive him for mistakes like Frankenstein's Island (1981)!
Posted by Bit Part Blogger 8 comments: