As a writer, his most famous work would have been the three Fu Manchu films starring Warner Oland (1879 - 1938). The Mysterious Dr. Fu Manchu (1929), The Return of Dr. Fu Manchu (1930), and Daughter of the Dragon (1931) which he also directed. He was a writer or director on eight films that starred Bebe Daniels and nine with Neil Hamilton. Hamilton, of course, went on to become Commissioner Gordon on the "Batman" TV show.

In 1939 Lloyd decided he had enough behind the scene work and moved back into the camera's field of view. He would stay there for the rest of his life.

Corrigan was in Young Tom Edison (1940) with Mickey Rooney, which I just watched on TCM. (Thanks!) That same year he made 12 other films, including The Ghost Breakers with Bob Hope, and The Return of Frank James with Henry Fonda.

In 1941 he starts off in Men of Boy's Town with Spencer Tracy, Mickey Rooney and the great Bit Actor Bobs Watson (1930 - 1999). This would also be the year he starts work in the Boston Blackie series as Arthur Manleder in Confessions of Boston Blackie. Chester Morris played Blackie, as he did in 14 installments. This was the second movie in that line, and Lloyd would be in six of them.

I would like to see some of Corrigan's lesser movies from this era. A look at the cast of North to the Klondike (1942) shows Broderick Crawford, Andy Devine, Lon Chaney, Jr. and Keye Luke. It has to be a good movie. That same year he appears in The Great Man's Lady, starring Barbara Stanwyck and Joel McCrea, and another ten movies! This decade, including the war years, has Corrigan in quite a variety of movies, from Hitler's Children to the Roy Rogers film, King of the Cowboys, and some stinkers like Captive Wild Woman and Tarzan's Desert Mystery. Along with Hitler's Children he made other war/propaganda films, including Passport to Destiny and Rosie the Riveter. 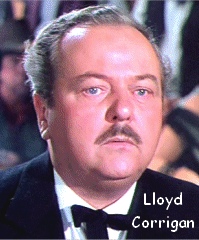 There is not much to write about during the later half of that decade. She-Wolf of London (1946), and Homicide for Three (1948) were two movies for only hard-core 1940s movie buffs. He did appear in Blondie Hits the Jackpot (1949) with Penny Singleton and Arthur Lake.

After a few better movies with bigger stars in the early 1950s, such as My Friend Irma Goes West (1950 with Martin and Lewis, Cyrano de Bergerac (1950) with Jose Ferrer, and Son of Paleface (1952) with Bob Hope, Lloyd starts work in television.

TV brought Lloyd mostly guest spots in teleplays. In 1954 he was cast as a regular on "Willy" starring June Havoc (1912 - 2010). I don't remember that series, or ever hearing about it. His TV appearances were varied, but we do see him in a lot of westerns. He has some recurring roles in "The Life and Legend of Wyatt Earp," "The Adventures of Ozzie and Harriet," and "Happy" starring Ronnie Burns.

In 1963 he plays the mayor in It's a Mad Mad Mad Mad World, along with a cast of thousands (of comedians). Corrigan's final regular work on TV was in "Hank" starring Dick Kallman (Who?) and he ends his work in "Petticoat Junction."

I guess I remember him for all those little television roles. I recently saw him in "Have Gun, Will Travel" and it jogged my memory. I may go back and find some of the Boston Blackie films, where he did some serious character acting as the millionaire. When you see his face, you will remember Lloyd Corrigan.
Posted by Bit Part Blogger 2 comments: