Of her 51 titles on IMDb, only ten were motion pictures, the rest of her work on the screen was in television, which she did well. Her first two movies, A Fig Leaf for Eve (1944) and The Fat Man (1951) were forgettable films where she had small roles. But in 1955 she became a regular on "The Ames Brothers Show" and that would have been enough to start a TV career. You will recognize her because she was almost always the 'old lady,' the 'landlady,' or aunt something.

Cheerio had appearances on many of the early shows in the 1950s. She was on "Studio 57," "Father Knows Best," "The Millionaire," and even had a guest spot on "The Johnny Carson Show" in 1955, long before he reinvented "The Tonight Show" in 1962. 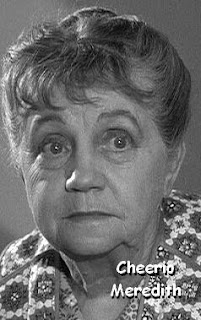 Plus, she appeared in a small role in Gidget (1959) as the nosy woman.

And into the 1960s in "The Many Loves of Dobie Gillis" and "Pete and Gladys." Finally, another regular spot on "One Happy Family" that only lasted one happy season. She also had a recurring role as Emma (either Emma Brand or Emma Watson) on "The Andy Griffith Show."

In fact, she was on both of my all time favorite television shows with Andy Griffith (b. 1926) and Dick Van Dyke (b. 1925). It doesn't get any better than that.